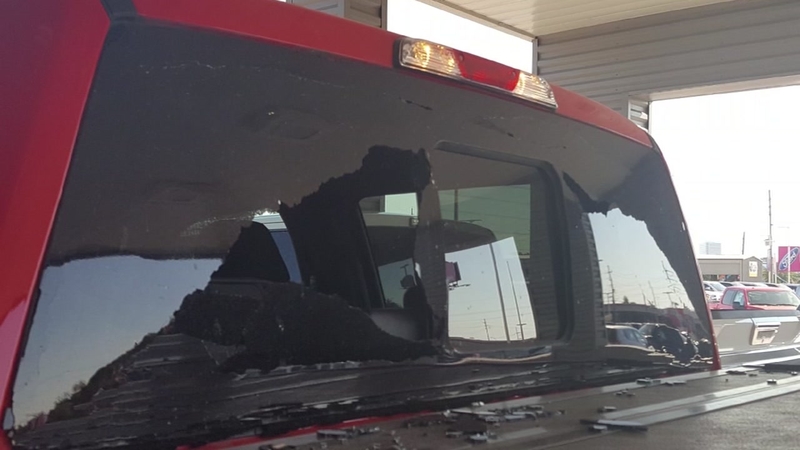 "That's my favorite car of all of the cars I've had," she said of the bright red Ford F-150 parked in her driveway.

It's a 2016 with low mileage. She's always wanted one. It's a truck with a five star safety rating. Which is why what she says happened on the way to school a week ago was so shocking,

"All of a sudden we heard a big bang and the glass shattered and we stopped," Jones explained. "(I) got out to look to see if anything had hit us and nothing. There (are) no marks, no anything, just shattered glass."

Jones said there was the smell of burning electronics, so she took it to a local dealer.

Both the dealer and Ford say there was actually evidence of an impact. The dealer told Eyewitness News he believed the window did not spontaneously shatter.

There are, however, other Ford F-150 drivers who have had reported similar experiences. The National Highway Traffic Safety Administration, or NHTSA, keeps track of complaints, investigations and recalls.

On their site, there were two other complaints about exploding rear windows for 2016 F-150s.

And there were multiple similar stories for every model year dating back to 2010. They were from locations all over the country.

Ford even sent us a statement which read, "We have not issued a recall for this concern. Safety is our top priority. Ford monitors a variety of data and when the data indicates a recall is needed, we respond quickly on behalf of our customers."

So how do you handle an issue with your car or truck if you think it might be a manufacturer issue?

Ray Moon owns Beechnut Auto Repair. He specializes in Ford vehicles. He suggests, if you suspect a manufacturer defect with your car or truck, go to a mechanic or dealer to find out if there are any recalls. If you don't get an answer you like, get a second opinion. If there is no recall, document everything and keep receipts.

"You want to have the mechanic document specifically what the failure is, what caused the failure, and what he did to fix the failure," said Moon.

Patricia Jones paid to get her window fixed. Nearly $700 later, she's hoping for some resolution that pays her back and prevents anyone else from experiencing what she says happened to her.