Body of fallen Sgt. honored with procession from medical examiner to funeral home 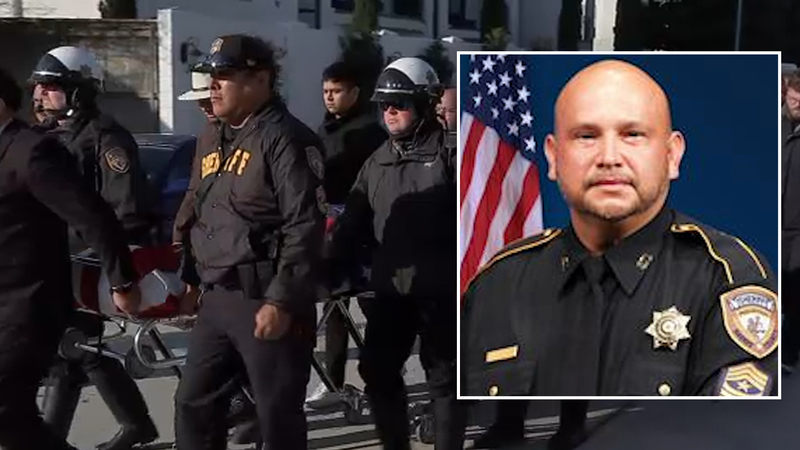 The procession started at the medical examiner's office on Old Spanish Trail and continued on to Claire Brothers' Funeral Home on Pine.

Dozens of law enforcement officers and the Gutierrez family were present.

You can watch SkyEye video from the procession in the video player above.

Gutierrez died Monday after a car hit him.

He was working an off-duty job as a motorcycle escort at the time.

Sgt. Ramon Gutierrez died Monday after he was struck by an alleged intoxicated driver while working an off-duty job as a motorcycle escort.

Gutierrez was taken to the Memorial Hermann Hospital by LifeFlight in critical condition where he was pronounced dead.


The driver, 40-year-old Lavillia Spry, is accused of fleeing the scene after hitting Gutierrez. She was later stopped by another deputy and arrested.

We've learned the sergeant had a daughter who was set to be married in a couple of months, and he was picking up extra jobs to help with the wedding.

Spry was charged with intoxication assault manslaughter, failure to stop and render aid involving death and evading arrest. During a court appearance Monday, a judge set her bonds at a total of $275,000 for the three charges.

The defense had argued for a lower bond, claiming Spry had just given birth to a baby four weeks ago and she was the caretaker for that child and a 15-year-old. But the judge disagreed, saying it appeared she wasn't too concerned with her children's well-being since she was arrested at nearly 1:30 a.m. while allegedly intoxicated.

It is with heavy hearts we mourn the loss of @HCSOTexas Sgt. Ramon Gutierrez (45). A veteran of 20 years, has served in our Vehicular Crimes Division for the last 13 years. Our thoughts & prayers go out to his wife, three children, his extended family, colleagues & friends. pic.twitter.com/qvF3xsgXtg

Gutierrez served with the sheriff's office for 20 years. Of those, he spent the last 13 years with the Vehicular Crimes Division.

According to Gonzalez, Gutierrez was married to his high school sweetheart, and together, they had three children - including a daughter who was set to be married in a couple of months.