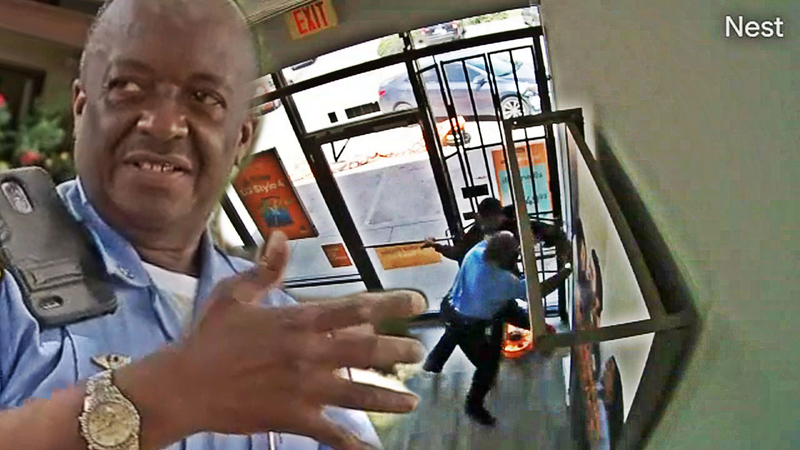 HOUSTON, Texas (KTRK) -- A security guard is being hailed a hero after trying to stop a robbery and it was all caught on camera.

Surveillance video shows a group of men pull up in a car at the Boost Mobile off Fulton in north Houston around 3:30 p.m. Saturday.

A vigilant security guard, Tomas Garcia, said he was in the guard shack, monitoring the strip center. He saw the men get out of the car with masks.

Meanwhile, video shows two suspects run into the store. One suspect acts as a lookout, while the other suspect, who is armed, grabs an employee and demands cash from the register.

As soon as a security guard approaches the door, the lookout runs off.

As for the second suspect, once he saw Garcia raise his gun, the robber dropped his gun. The second robber tried to leave the store but Garcia grabbed him. He kept trying to get out of Garcia's hold and eventually did.

Amazing! Hero store clerk tells the story of how she locked a robber in the cell phone store until police arrived.

The robbers took off. Garcia says he didn't shoot his gun because other employees were in the store, and he didn't want anyone to get hurt.

While the suspects took off, they did leave evidence behind, including a gun and the car they used in the robbery. The car was reportedly stolen earlier this month in a carjacking. However, it's not known who the robbers were in the carjacking.

"He risked his life and he came within minutes," said Saad Hashmani, of Boost Mobile. "He had his eye toward the shopping center to make sure everyone was safe. He actually saved us."

Garcia says he isn't a hero, he's just glad he was there.

Police say if you recognize these robbers, call HPD or Crime Stoppers at 713-222-TIPS.