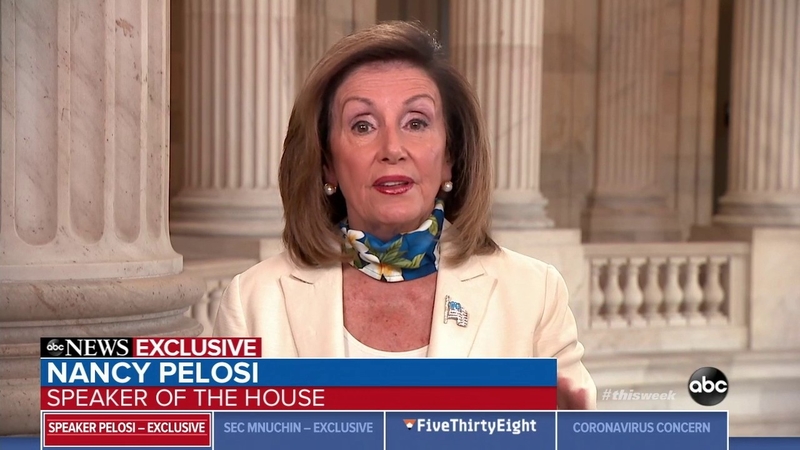 "He's the one who's standing in the way of that. We've been for the $600. They have a $200 proposal, which does meet the needs of America's working families, and it's a condescension, quite frankly, because they're saying, 'They really don't need it. They're just staying home because they make more money at $600,'" she said during an interview with Martha Raddatz on ABC's "This Week."

Pelosi and Treasury Secretary Steven Mnuchin, chief negotiators of the stimulus deal, spoke exclusively on the show after meeting Saturday and reporting progress.

Political pressure is mounting to restore the expired supplemental unemployment benefit. The Trump administration is willing to extend the newly expired $600 jobless benefit for at least one week. But Democrats labeled that plan as a political stunt and are pushing for more, like state and local government aid, food stamp increases, and assistance to renters and homeowners.

"The president is very concerned about the expiration of the unemployment insurance," Mnuchin said in response to Pelosi's interview. "We proposed a one-week extension at $600 so that while we negotiate a longer-term solution, at least all these people don't lose their money, and I'm surprised that the Democrats won't agree to that. They are insistent on having this as part of a larger deal."

Still, about one-third of Senate Republicans had been fighting to trim back the $600 benefit, saying it must be slashed so that people don't make more in unemployment than they would if they returned to work.

Pelosi argued that the $600 boost does not disincentivize Americans from going back to work, citing a Yale University study suggesting that unemployed people with larger percentage gains in their benefits were no less likely to return to work than those with smaller increases.

Pelosi called the GOP characterization "disrespectful" and emphasized the importance of keeping people out of poverty.
"They're subjecting someone who gets $600 to scrutiny that they won't subject some of the people who get millions of dollars in the PPP," she said.

Mnuchin said he and White House Chief of Staff Mark Meadows presented "three or four" different counteroffers to the Democrat's federal unemployment proposal but would not specify details.

"[We] understand that unemployment is supposed to be wage replacement, so it should be tied to some percentage of wages. The fact that we had a flat number was only an issue of an emergency," he said.

Mnuchin also pointed to areas of bipartisan support within the bill, like funding for personal protective equipment and a second round of $1,200 stimulus checks.

But Pelosi said Democrats are not willing to back down on their $600-per-week plan. She responded to comments from colleague House Majority Leader Steny Hoyer, D-Md., who told CNN on Tuesday "it's not $600 or bust."

"The amount of money that's given as unemployment insurance should relate to the rate of unemployment. So as that goes down, you can consider something less than the $600," she said.