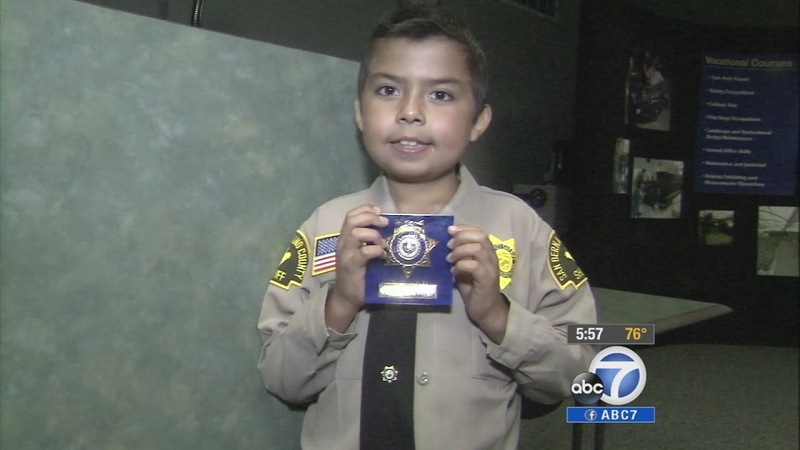 SAN BERNARDINO, CA -- Odie Garcia spent the past year battling cancer, so members of the San Bernardino County Sheriff's Department decided to give him a special treat for his ninth birthday.

He was sworn in as an honorary sheriff's deputy Tuesday ahead of his birthday this weekend.

Arcos says this birthday was extra special because the past year has been a real tough time for Odie.

After being sworn in by deputies, Odie received training and was then given a demonstration by the SWAT team.

He also had a chance to get behind the wheel in the driving simulator. Then, it was time to confront some bad guys.

"Let me see your hands. Drop the weapon," he said.

The whole day was made possible through the Debbie Chisolm Foundation.

"For the kids and the families both, they've gone through such a torturous regimen of chemotherapy, and all the things that are going on in the hospital, needle sticks, and to come out and actually fulfill their dream, it means the world to them," Corky Bell of the Debbie Chisolm Foundation said.

After the helicopter ride, the sheriff's academy class came outside and did push-ups in honor of Deputy Odie Garcia.

In the end, it was an inspirational day for everyone.

"He's a role model and inspiration for all of us," San Bernardino County Sheriff's Deputy John McMahon said. "Just when you think you're having a bad day, look at someone like Odie, puts things in perspective."