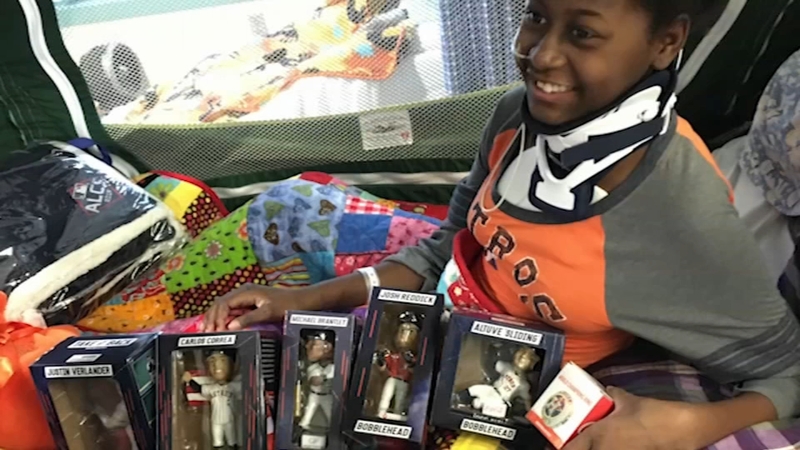 HOUSTON, Texas (KTRK) -- A 13-year-old girl who remains hospitalized after she was injured in a hit-and-run crash has the Houston Astros with her for every step of her recovery.

London Banks' mother, Shandra Mosley-Banks, says London and her brother were walking back from a convenience store when she was hit by a car on Wednesday, Oct 2. in north Houston. The driver remains at large, according to investigators.

London has had some milestones, including breathing on her own and now saying these first words since the crash: "Go 'Stros."

In an update Sunday, London's mother told ABC13 she is doing well and is on the road to recovery, adding that she and her family made for the loudest room in the hospital during Saturday's game.

Mosley-Banks says London can understand what others are saying and is getting around with some help and a walker.

She said the Astros organization invited London to attend a World Series game, but a doctor did not approve and felt it would be better for her recovery if she didn't attend.

The girl is a huge Astros fan who has a long journey ahead as she heals from bi-lateral brain injuries.

SEE ALSO: Young Astros fan breathing on her own week after driver hit her and ran

She is still at Shriners Hospital, and thanks to her gift from the Astros organization, the recovery just got a little easier.

"She started pulling stuff out of the bag and rocking and getting all excited," said Mosley-Banks, who was recording as London opened her gift.

The Astros haul included bobble heads, t-shirts and a blanket, but the highlight has to be the replica World Series ring. It brought out her inner fan in a big way.
"She goes, 'Go 'Stros!' and the nurses and all of us are screaming, like, 'Go London!'" explained Mosley-Banks.

"As soon as I received that text, I called her mom and said, 'Thank you, that made my day,'" said the Astros Foundation's Twila Carter, who sent the gifts to London and even extended a special invitation. "In 2020, we would like to have her here to toss out a first pitch, and as big of a fan as she is, I can imagine that will get her going."

Please pray for London Banks — she remains in the hospital after a hit & run last week that left her with severe brain injuries. No 13 year old should have to go thru this! The driver has not been located. 💔🙏🏽 #TeamLondon pic.twitter.com/wfXDfy0B7I