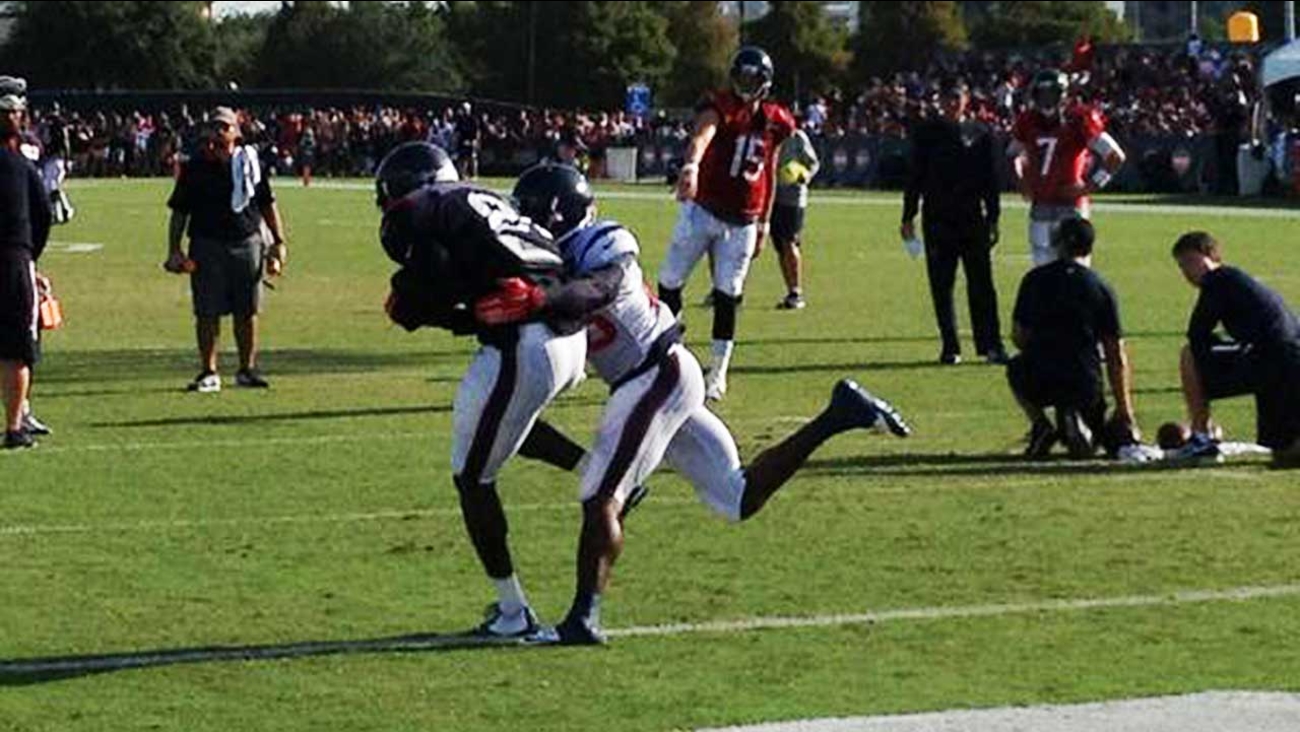 HOUSTON (KTRK) -- If Ryan Mallett wins the Texans' starting quarterback job, I'll look back to this day and this moment.

The 5th-year veteran lofted another perfectly placed deep ball for another huge gain this morning, and as Mallett turned towards the next play he got wrapped up. Texans tackle Duane Brown locked his quarterback in a bear hug and lifted him off the ground. Mallett told me afterwards he thought he'd made one of the defensive players mad and they were letting him know it. Instead, he was getting the ultimate affirmation from one of the team's veteran leaders. Mallett's teammates know he can make plays to help them win games. That's what camp is all about. Who's here to help us win? Mallett looks like he is.

Texans Coach Bill O'Brien warned us today, don't read into the starting quarterback for Saturday's preseason opener. (Texans host the 49ers at 7pm on ABC-13). O'Brien won't even tell us who will start. He told us that both Mallett and Brian Hoyer are even. But Mallett had another great day today. He looked great for long stretches against Washington's defense in Richmond, Va. If all he does in the preseason games is carry over what he's done on the practice field, Ryan Mallett can be the starting quarterback for the Houston Texans.

Running back Chris Polk told me he loves being back at practice making plays after sitting out with a hamstring issue. Polk looked really good at times, both running and making big plays in the passing game. I asked Bill O'Brien about Polk's return and he told me that a 50 play scrimmage was huge for the free agent from Philadelphia. Polk got reps and got more comfortable. The U. of Washington product also told me he really liked his time in Philadelphia but he sensed an opportunity to make his mark here. Today was a good day for #22.

Last year's 3rd round pick, Louis Nix, was back on the field today. O'Brien told us Nix should play Saturday night. He needs to play well after missing all of last season and struggling again to get started in this camp. Nix has talent and can help, but only if he can stay on the field.

O'Brien and tackle Duane Brown both said the same thing about tonight's debut of HBO's Hard Knocks: watch the language. They both realize that football is intense and so is the language. O'Brien has seen episode one and he's already afraid of what his mom will say. Should be a lot of fun tonight.