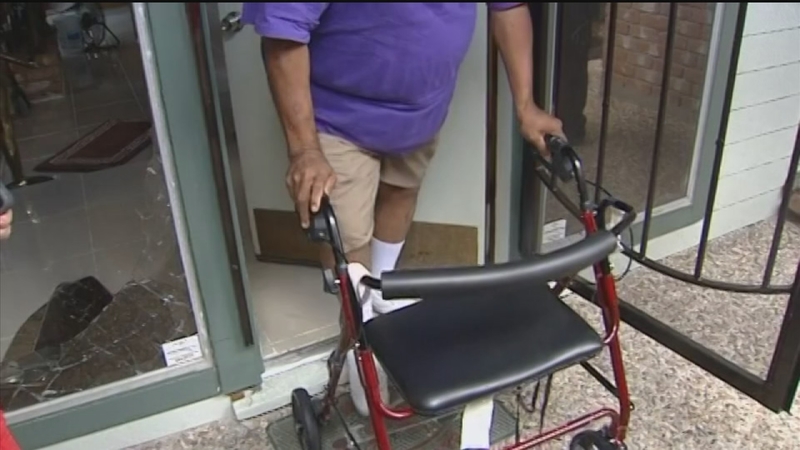 HOUSTON (KTRK) -- A 73-year-old veteran was targeted by what police believe was the same robber who targeted him twice last month. And today -- just as before -- the robber got away, but this time without taking anything.

Houston police were en route to the house Friday to follow up on the prior robbery cases. When they arrived, the security alarm was sounding.

The robber had already fled. The homeowner, Charley Powell, says when his caretaker opened the gate, he assumed it was the police officers. Instead, it was a man in a mask.

Powell is in poor health, and is still recovering from being pistol-whipped during the last robbery. He required 29 stitches in his head.

"I don't think no one's coming to kill me, but I got to think something: No reason for him to come in broad day like this," he said.

The robbers took cash, jewelry and two vehicles from the home last month. A car and a minivan were later recovered from a nearby apartment complex.

Police believe it is one robbery ring at work, consisting of four men and one woman. They may be involved in other home robberies in the same area of southwest Houston.

"These guys are out committing robberies and they're targeting him because they believe he's got a little bit of money and jewelry and things on hand they wanna take," HPD Sgt. Clint Ponder said.

In the second robbery at the home, the suspect fired a shotgun blast in the house. This time, the disabled homeowner was trying to pull his own gun when the robber retreated and ran.

Nothing was taken Friday because a loud alarm and the homeowner's assistant chased him off, but not before he kicked in a window. Powell doesn't intend to wait for a fourth robbery.