Man and woman beat on man's truck before shooting him, witnesses said 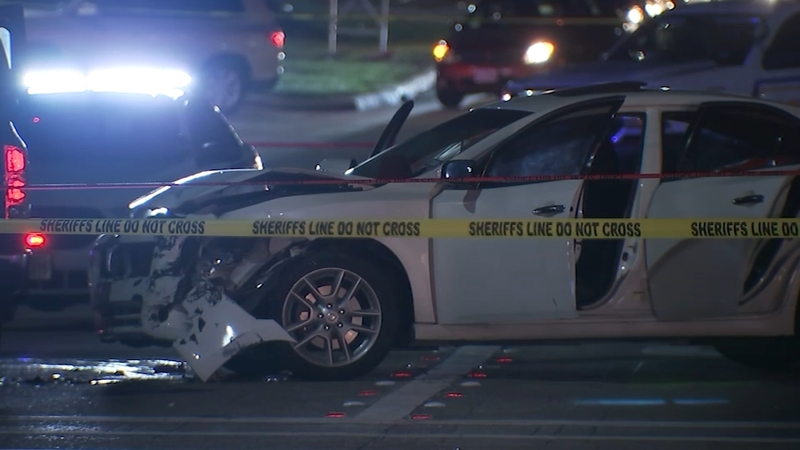 HOUSTON, Texas (KTRK) -- A man is reported to be in critical condition after a shooting and a multi-vehicle crash in northwest Harris County that may have stemmed from a road rage incident, according to the Harris County Sheriff's Office.

Authorities are investigating the crash that happened Friday afternoon at the intersection of Highway 249 and Bammel N. Houston, where at least four vehicles were involved.

Investigators said deputies responded to a shooting call at the corner of North Houston Rosslyn and Highway 249. When deputies arrived, they found a man between 35 and 45 years old with a gunshot wound. Authorities said the man had been involved in a crash after he was shot. The man was taken to the hospital in critical condition. A mother and three children were also taken to the hospital with minor injuries. There was another car full of people, but they were not injured.

"We were on our way home and we heard three gunshots and I guess the driver lost control and he ran into us," said Gabriela Martinez who was with her mother, sister, and a friend.

@HCSOTexas units are investigating a shooting at the 12800 blk of N. Houston Rosslyn. The shooting may have stemmed from a road-rage incident. One adult male has been transported to the hospital in critical condition. No additional details at this time. #Houston

Witnesses told authorities the victim was in his pickup truck at a light when a black Dodge Charger, with a man and a woman inside, pulled up. The man and woman, both described to be Black, got out of the Charger, approached the victim's truck and began beating on it. Witnesses said the woman claimed the victim had hit their car, according to Sgt. Greg Pinkins. Once the light turned green, the victim attempted to drive off but the Black male pulled a gun and fired several times into the pickup truck, Pinkins said. When the victim was able to drive off, he crashed his truck right into several vehicles.

The man and woman went back into their Charger and fled the scene heading northbound. Shaun Cortes, who was waiting at the light, captured a short video of them fleeing, which he provided to investigators.

"That ain't cool. You don't go shooting into people," he told ABC13.

Deputies have not released any additional information regarding the man and the woman involved in the incident.