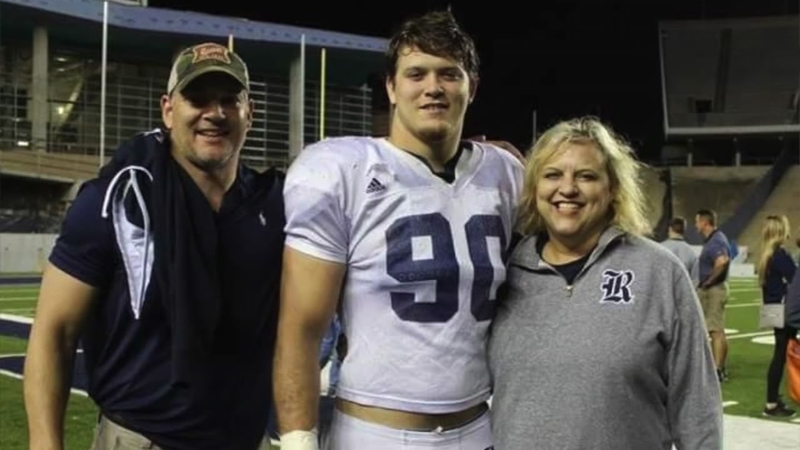 SOUR LAKE, Texas (KTRK) -- Right up Highway 105 and down a winding back road, you'll see a big wooded backyard. There's wind chimes and chickens. The Padgetts live here and they love their simple country life.

"He liked to sit out by the burn pile and listen to music," said Wyndi Padgett.

Inside, just looking around the house, it's evident they're all about family.

"I'm a little bit crazy about pictures," Wyndi says. "The five of us did everything together."

Mical and Wyndi were high school sweethearts. Mr. Padgett was a football standout at University of Texas.

"What Wyndi and I have we hold most dearly. Our kids," Mical said.

Kenedy, Kameryn and the oldest, Blain, who wanted to follow right in his father's footsteps.

"I guess he was like seven or eight when he said, 'Dad, I really want to play college football,'" Mical remembers.

Blain's heart was set on football. His dad coached him. His biggest cheerleader, Mom, capturing every moment along the way. She reminisced with us as she flipped through a big photo album.

"From the time he was born until college," she added.

Blain was 21 and living out his dream, a star defensive end for Rice University. A sports management major, the good ole' country boy never forgetting where he came from, even bringing mom's casseroles to share with the team and getting back to Sour Lake every chance he could.

"The four of us stopped. Blain's home for the weekend," said Mrs. Padgett.

Family came to see him too, supporting Blain at every game. Last fall during this game against University of Houston, he injured his shoulder. The injury was so bad, he needed surgery, and would have to sit out for the season. But he was determined to get back on the field. Last spring, things began to look up.

He spoke with his son on March 1.

"We had spoken on the phone 45 minutes to an hour," he said.

"That night was different. Blain was so excited about tomorrow. He had just been released from his surgery," said Wyndi.

That was the last conversation they had with Blain. One night, one pill, the family says changed their life forever.

"I got a call from one of Blain's teammates asking if I knew where he was," Mical explained.

Blain didn't show up for the team workout the next morning.

"I knew at that point something was wrong," he said.

The family rushed to Blain's off-campus house, met by teammates, coaches, and police.

"I thought somebody had killed my kid. The police officer said, 'Mr. Padgett, we've got some bad news, your son has passed.' I didn't believe it," Mical said.

"I remember just screaming. I fell to the ground," Wyndi said, in tears.

So what killed Blain? It haunted the family for three months. Then in June, a bombshell: the medical examiner's office revealing Blain died from "toxic effects of carfentanil," a dangerous synthetic opioid used to tranquilize elephants.

According to the DEA, the drug is 100 times more powerful than fentanyl and suppresses breathing. The Padgetts had not even heard of it until now.

"I knew my son did not intentionally take this drug. Not to say that he's not a kid and hadn't experimented with different things," Mical said.

"You worry about your kid getting in a car wreck. Worry about college drinking and driving or getting into a bar fight, but you don't worry about them going to sleep and not waking up," added Wyndi.

Mr. Padgett believes Blain took what he believed was hydrocodone before going to bed that night, but the medical examiner now confirms it was laced with carfentanil.

"The problem is the scumbags that are making it. This is very cheap and they can put anything in it," Mical said.

It took almost two months for the Padgetts to agree to sit down and talk with Eyewitness News. They decided to share their story now because they want to warn other families, because what happened to Blain Padgett could have easily happened to anyone's child.

The family is now holding on to all the memories and each other. They just want their content, country family and their boy back.

"That's what I think of everyday when I open my eyes. He's not here, I lost a best friend. He was not only my son, but my best friend," Mical said.

"I think about Blain all the time. We miss him terribly. He knew we loved people and he told us how much he loved us. So we don't have regrets and I'm very thankful for that," Wyndi said.

HPD homicide detectives are on the case and say the investigation is still ongoing. If you have any information about Blain's death, police want to hear from you.