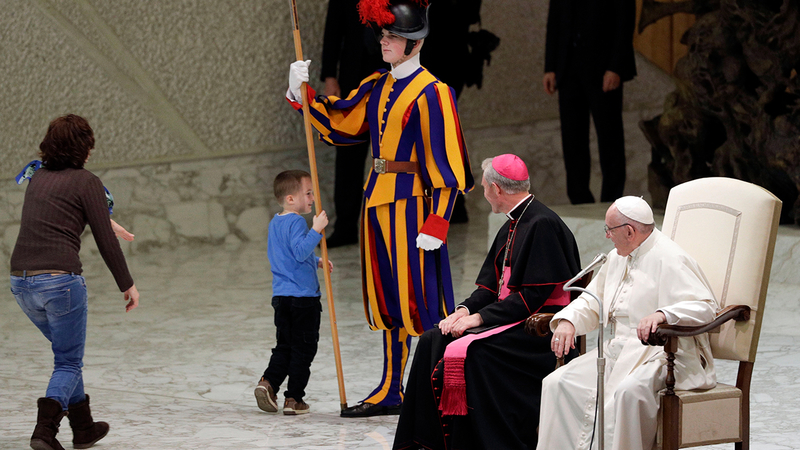 VATICAN CITY -- Pope Francis praised the freedom - albeit "undisciplined" - of a disabled child who climbed onto the stage Wednesday to play during the pontiff's general audience.

The Swiss Guards and Vatican gendarmes stood by Wednesday and gamely let 6-year-old Wenzel Wirth run around Francis as monsignors read out his catechism lesson in various languages in the Vatican audience hall.

At one point, the boy's Argentine-Italian mother came on stage to fetch him and explained to Francis that he couldn't speak. Francis told her "Let him be, let him be" and the mother retreated and let Wenzel continue to play.

When Francis took the microphone, he explained in Spanish to the crowd that the child was speech-impaired. "But he knows how to communicate, to express himself," he said.

"And he has something that made me think: He's free. Undiciplined-ly free, but he's free," a chuckling Francis said to applause from the crowd. "It made me think, 'Am I so free before God?'"

"When Jesus says we have to be like children, it means we need to have the freedom that a child has before his father," Francis continued. "I think this child preaches to all of us. And let us ask for the grace of speech (for him)."

The boy's father, Ariel Wirth, told The Associated Press that Wenzel suffers from behavioral problems as well as his speech limitations, and that the family at home tries simply to let him express himself as he can.

"We try to let him be free. He has to express himself, and we live without hiding his problems," he said.

The family lives in Verona and came to Rome just for Wednesday's general audience. Wirth said Wenzel was tired after the long journey and long wait for the pope Wednesday morning, and clearly needed to run around.

"It was not planned," he said, though he added that the family had told Wenzel that they were going to see the pope and that he was clearly excited at the prospect.
Report a correction or typo
Related topics:
religion & spiritualitydisabilitychildrenpope francispopeu.s. & world
Copyright © 2022 by The Associated Press. All Rights Reserved.
TOP STORIES
Timeline breaks down Uvalde shooter's movements day of massacre
TX school shooting leaves at least 19 children, 2 adults dead
2 dead, suspect barricaded in NW Harris County, sheriff says
Uvalde school shooting: What we know about 19 kids, 2 teachers killed
Beto O'Rourke confronts Texas gov. at Uvalde shooting press conference
Houston mayor after shooting in Uvalde: 'Our values are messed up'
HISD staff encourage talking with kids about Uvalde tragedy
Show More
Where do Texas gun laws stand?
Mother of Houston Olympic champion receives donated food truck
Major crash shuts down NB lanes of Gulf Fwy at FM 1765
More firearm dealers than mental health providers in Uvalde
Here's what to know about NRA meeting in Houston
More TOP STORIES News