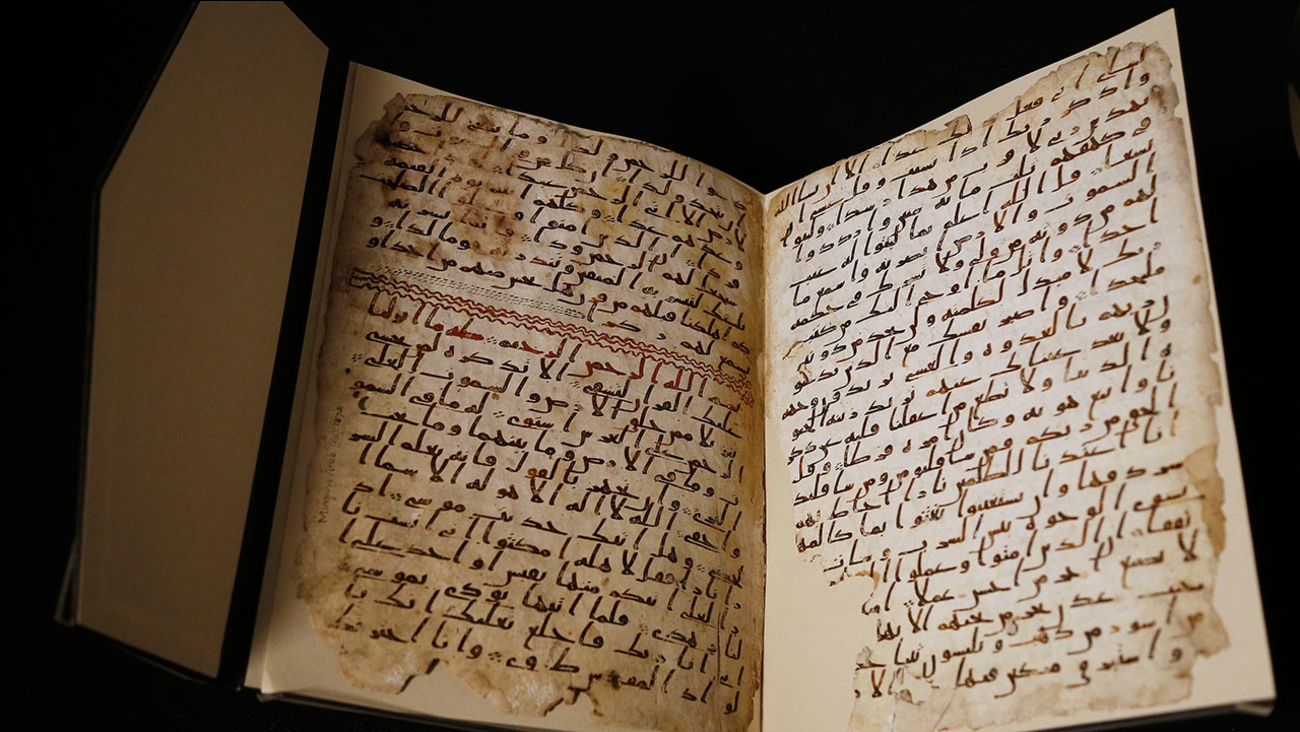 A university assistant shows fragments of an old Quran at the University in Birmingham, in Birmingham central England Wednesday, July 22, 2015. (AP Photo/Frank Augstein)

LONDON -- A British university disclosed Wednesday that scientific tests prove a Quran manuscript in its collection is one of the oldest known and may have been written close to the time of the Prophet Muhammad.

The announcement by the University of Birmingham thrilled Muslim scholars and the local community, which boasts one of the country's largest Muslim populations. The find came after questions raised by a doctoral student prompted radiocarbon testing that dated the parchment to the time of the prophet, who is generally believed to have lived between 570 and 632.

"This manuscript could well have been written just after he died," David Thomas, a professor of Christianity and Islam at the University of Birmingham said of the fragment written in ink on goat or sheepskin.

Muslim tradition says the prophet received the revelations of the Quran between 610 and 632 - but it wasn't written down immediately. The first leader of the community after Muhammad's death, Caliph Abu Bakr, ordered the book to be written and it was completed by the third leader, Caliph Uthman, in 650.

Thomas said the tests conducted by Oxford University suggest the animal from which the parchment was taken was alive during the lifetime of the Prophet Muhammad or shortly afterward.

The two parchment leaves contains parts of suras, or chapters, 18 to 20. The manuscript is written with ink in an early form of Arabic script known as Hijazi.

The manuscript has long been part of the university's Cadbury Research Library. But it had been bound improperly and was attached to the leaves of a manuscript with a similar script that is not as old. The library houses approximately 200,000 pre-1850 books dating from 1471 and around 4 million manuscripts.

The carbon dating was undertaken after an Italian doctoral research student, Alba Fedeli of Milan, noticed the difference in the writing. She also found discrepancies in the documentation that made her question whether the works were the same.

She said the development was just as wonderful as the rest of her work, trying to downplay the attention that followed her discovery.

"Every time I have a chance to see an original manuscript, I feel I have a beautiful opportunity," Fedeli said. "I was very happy to add a further element."

Birmingham is a center of Islam in Britain, with about 20 percent of the city describing themselves as adherents of the faith. The planned display for the manuscript in October could prove a boon to the local economy, with adherents already expressing an interest in traveling to the city to see a piece of history.

Muhammad Ali, the administrator at Birmingham Central Mosque, described his emotion at being among only a handful of people invited to view the manuscript three weeks ago after its importance was recognized.

"There were tears in my eyes," he said, recalling his thrill at seeing something from the time of the prophet. "It is very much unique. This is something from his life."