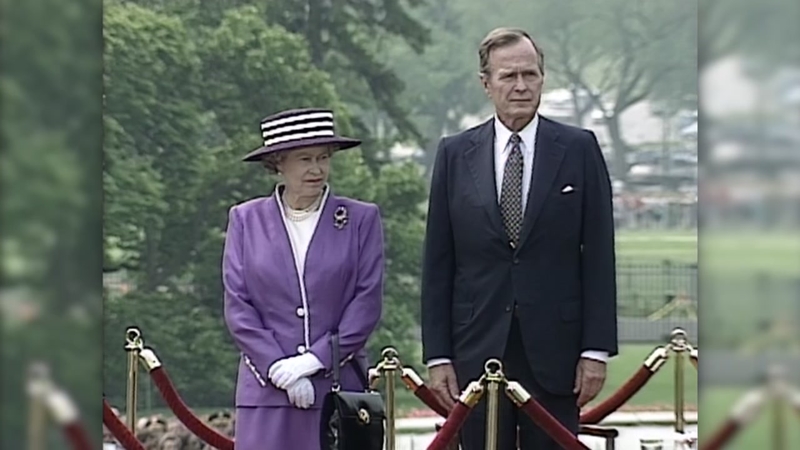 In a statement, the Queen said Bush served the United States with "honor and distinction" both in politics and in the military during World War II.

She also referred to the former president as a "great friend and ally" of the United Kingdom.

And said her thoughts and prayers are with Bush's family and the American people.

Bush, the 41st president of the United States, died Friday in Houston at the age of 94.

A message from The Queen to President George H.W. Bush:

"It was with sadness that I learned of the death of President George H W Bush last night. President Bush was a great friend and ally of the United Kingdom. He was also a patriot, serving his country with honour and distinction in Office and during the Second World War. Prince Philip and I remember our days in Texas in 1991 with great fondness. My thoughts and prayers are with President Bush's family and the American people." - Elizabeth R.
Report a correction or typo
Related topics:
politicsqueen elizabethroyal familyu.s. & worldgeorge h.w. bush
Copyright © 2022 KTRK-TV. All Rights Reserved.
TOP STORIES
51-year-old on the run as suspect in corporal's ambush killing
Sergeant was to walk daughter down aisle until his hit-and-run death
Mom shares story of son's 'scary' battle with COVID complications
H-E-B's Scott McClelland retirement and what's next
Drying out but staying cool this week
LULAC set to sue Houston City Council for lack of Hispanic members
New security director aims to improve safety for Jewish organizations
Show More
IRS changes you should know before submitting taxes
Cause of death revealed for 23-year-old woman found dead after date
Texas among states suing Google over claim it's misleading consumers
Man accused of stabbing K-9 in The Heights now charged
'We knew something big exploded': ABC13 recalls moment of Watson blast
More TOP STORIES News