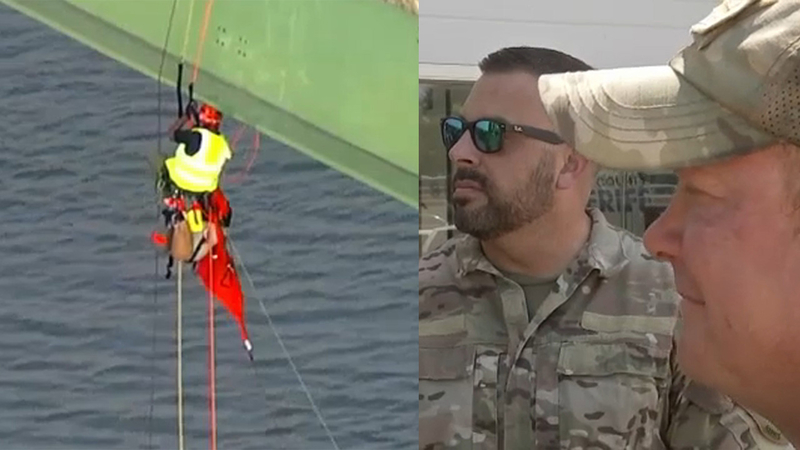 BAYTOWN, Texas (KTRK) -- The first responders who risked their lives to approach Greenpeace protestors who rappelled off the Fred Hartman bridge, closing part of the Houston ship channel, said previous training played a major role in pulling off the daring arrest.

Last Thursday, eleven protesters, and their flags, flew below bridge. As they dangled, a group of Harris County Sheriff SWAT members devised a plan to remove them.

It wasn't easy. At more than 150 ft. above the water, a lot could've gone wrong.

ARRESTING THE PROTESTORS: Last week, @HCSOTexas arrested protestors who rappelled off the Fred Hartman Bridge. @abc13houston at 5pm, what it was like to make the daring arrest. pic.twitter.com/C0dFtgyXVW

"It's always a little bit nerve-racking when you come over the edge, but you kind of go into your training mode," recalled Deputy Scott Cogburn. "It's something we train for and remain calm."

It took deputies more than 12 hours to remove the protesters. Greenpeace USA said it pulled the stunt ahead of last week's Democratic debate in Houston to raise awareness to fossil fuels. The protest blocked traffic both on the ship channel and SH-146. They didn't apologize during a hearing this weekend.

Protesters with Greenpeace face a pair of criminal charges after a day-long protest beneath the Fred Hartman Bridge.

On Monday, ABC13 asked responders what they thought of their actions.

"I think they disrupted a lot of lives, don't get me wrong, but at the end of the day, we have a job to do and we are the consequence," Cogburn said. "So, that day, that opportunity, we were the consequence for their actions."

"We have a job to do, just like they felt they needed to do, so, there's no hard feelings with one another," said Harris County Sheriff's Office SWAT team leader, Corey Alexander.

To safely remove the eleven protesters, SWAT members relied on the protesters to act peacefully. They did, which allowed SWAT to move them from one harness to another.

"It took us, for each rapeller that we have, 45 minutes to an hour for us to lower, hook-up to them, safely get them out of their gear, and then onto a boat," Cogburn recalled.

The assignment might have been more than 150 ft. above water, but to this group of responders, it was another day on the job.

"Definitely, something I always wanted to train on to see how it was like," Alexander said. "I've rappelled from a few things that were a little bit higher than that, but that's definitely the highest one I've done in Harris County."

As for the protesters, they face federal and state charges. They were released from jail Saturday, but if convicted, face more than a year in jail.