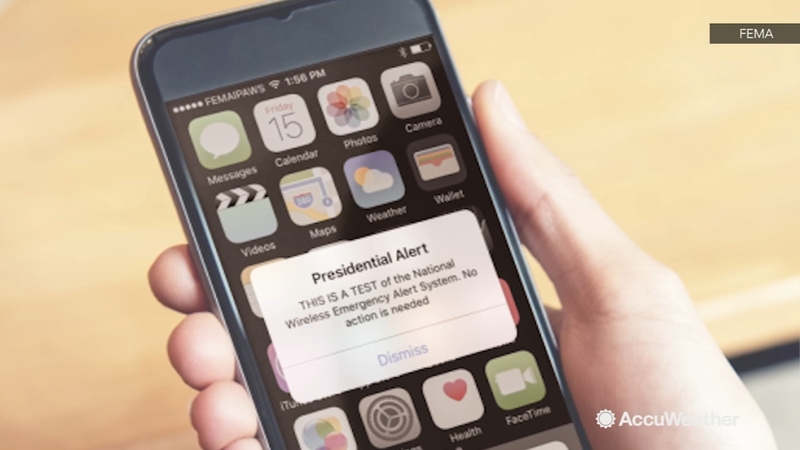 WASHINGTON -- This is why you may have gotten a notification from the White House on Wednesday.

The government tested a new national alert system that would let presidents send out emergency messages to phones all over the country.

"Presidential Alert: THIS IS A TEST of the National Wireless Emergency Alert System. No action is needed."

While not everyone received the message, phones that did should only have received it once, with a special tone and vibration that people will recognize, FEMA said.

The WEA system is currently used to warn the public about dangerous weather, missing children and other critical situations. The president would be able to use this system to send alerts if there is a "public peril" that would require nationwide notification, like if there were a risk of an imminent attack or multiple terrorist attacks, according to FEMA.

The EAS portion of the test was sent to participating broadcast entities at 2:20 p.m. EDT.

The test was performed to see if there are any improvements that need to be made to the way these presidential alerts would be distributed in the future. It was originally scheduled for Sept. 20, but was pushed to Oct. 3 due to Hurricane Florence.
Report a correction or typo
Related topics:
emergency drillfemafccthe white housetextingu.s. & worldpresident donald trumptext messagestests
Copyright © 2022 KTRK-TV. All Rights Reserved.
TOP STORIES
Driver in Highway 249 road rage incident speaks out
Something strange is happening with our universe: NASA
Rain chances continue into the work week
Texas woman sought in fatal shooting of pro cyclist: US Marshals
Man's body found 6 miles from separate shooting call in NW Houston
Deputy hit while working accident during Jeep weekend, sheriff says
Alcohol and storms contributed to deadly crash in Asiatown, HPD says
Show More
At least 12 displaced after SW Houston apartment fire, HFD says
78,000 pounds of infant formula arrives in US
Man shot on apartment balcony; same apartment shot up earlier: HPD
Houston launches guaranteed income pilot program
'It was like a mad dash:' Clear Creek ISD senior set to graduate
More TOP STORIES News