Which Houston areas have the lowest voter turnout?

President Donald Trump leads former Vice President Joe Biden with the support of 50% of the state's likely voters to Biden's 45% in the 2020 race for president, according to the latest University of Texas/Texas Tribune Poll. 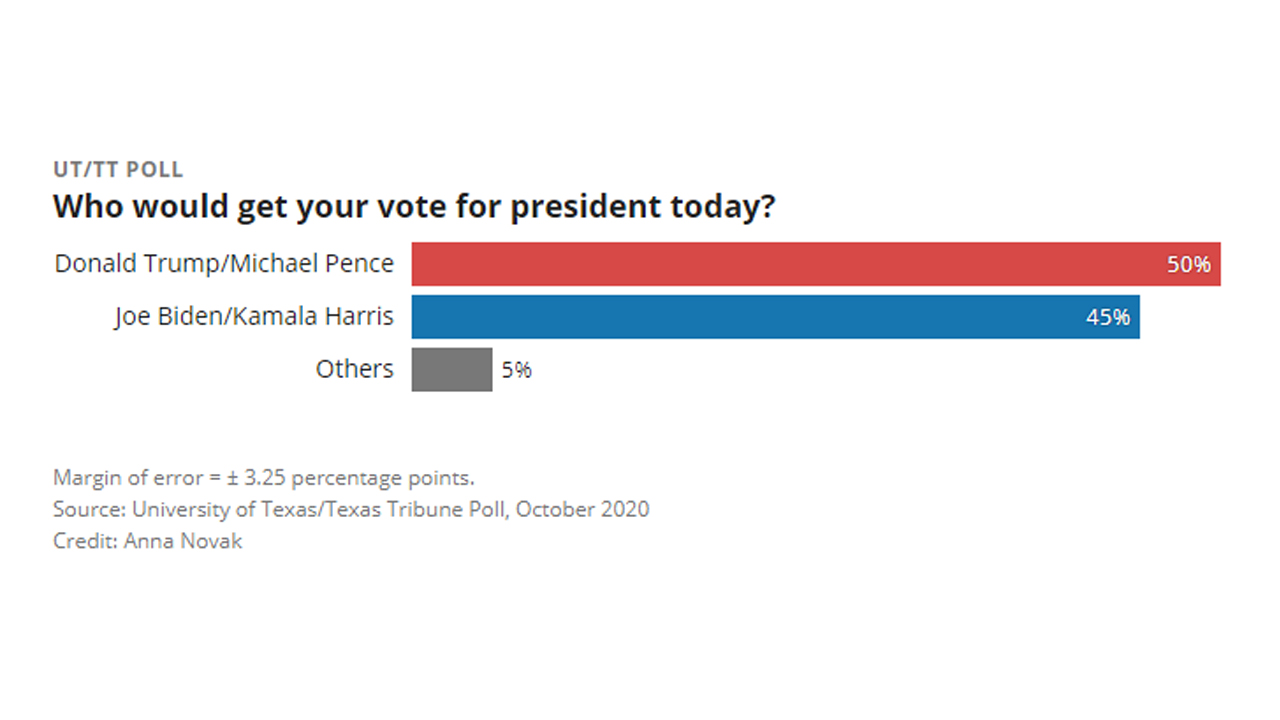 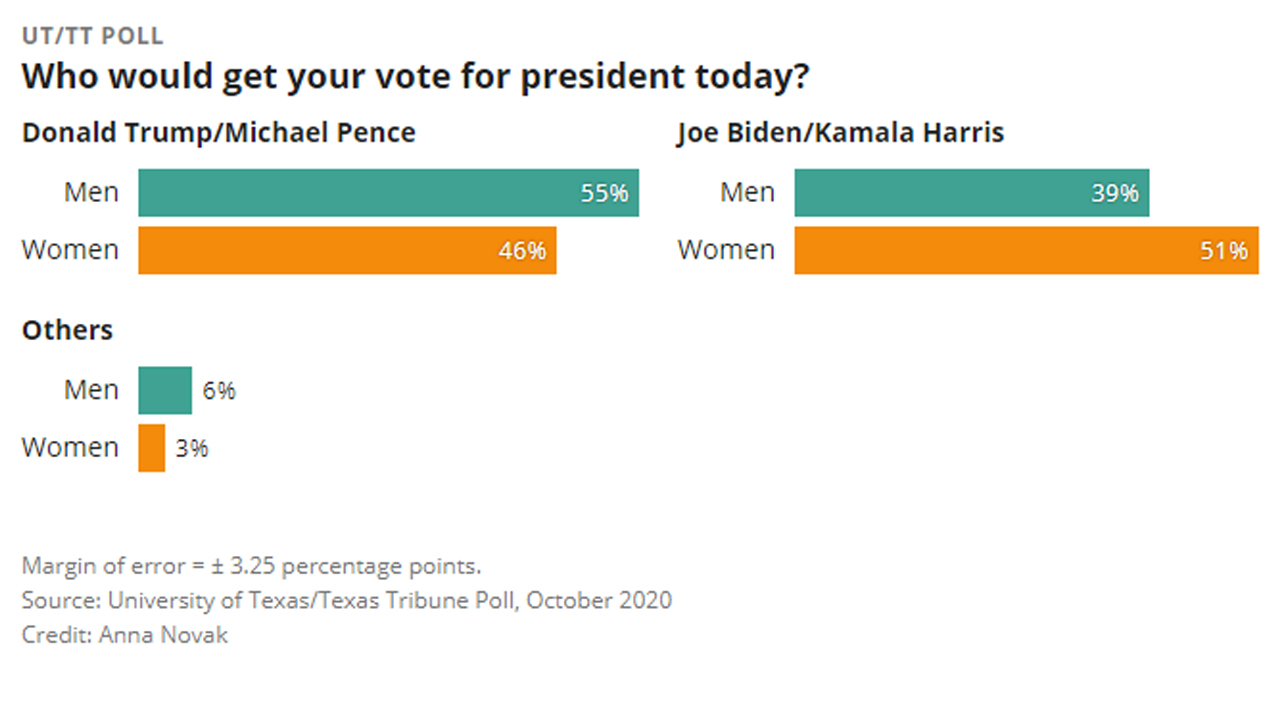 Despite the dramatic swings in events and issues during 2020, the contest for the hearts and minds of Texas voters has changed little in the race for the nation's top elected office. The latest poll is a case in point; the survey was conducted during a period that included the first presidential debate and Trump's hospitalization for COVID-19. Even so, the result is in line with previous UT/TT surveys. In February, a UT/TT Poll found Trump ahead of Biden 47%-43% in what was then a hypothetical head-to-head race, because the Democrats had not chosen their nominee. In April, Trump led 49%-44%, and in June, 48%-44%.
Daron Shaw, a professor of government at the University of Texas at Austin and co-director of the poll, noted the constancy of those poll results since before Biden was the chosen Democratic candidate.

"What it really shows you is just how much of this is about Trump," he said. "The race is a marker for attitudes towards Trump. It really is a referendum." 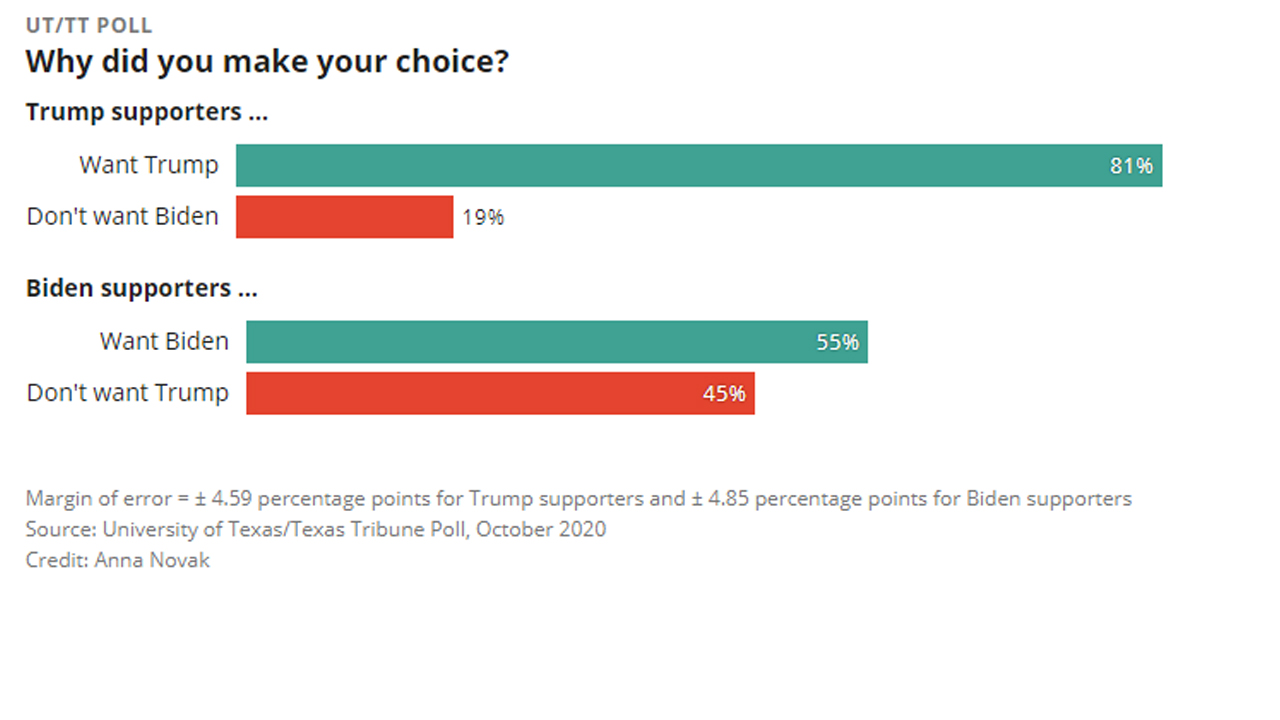 "Numerically, Trump's problem is with the Democrats," Shaw said. "If you can't win any Democratic votes in Texas, you're not going to win by (Greg) Abbott margins or (George W.) Bush margins. It turns a 10-point race into a 5-point race."

The economy was the most important issue behind the presidential vote for 11% of voters, and for 22% of independents asked to name the top issue behind their choice. It was also the top pick among Republicans (15%), followed by socialism and/or communism, the issue mentioned by 12% of Republican voters on that open-ended question. Among Democrats, 19% cited removing the president as their top issue, followed by coronavirus/COVID-19 (11%) and health care (9%).

Most voters have made their final decisions: 91% said they are unlikely to change their minds before they vote.

"The reality is, if you look across those items, you see that the issue is, again, the personal traits of the president and, to a lesser extent, the former vice president," said Josh Blank, research director for the Texas Politics Project at UT-Austin. "Ultimately, it is all about Trump."

"We're not seeing the race open up in the way we're used to," Blank said. He said the independent voters in Texas who typically end up with Republicans - like they did in the Texas race for president four years ago, siding with Trump - are on Biden's side this year.

"The president lost independents in Texas a little while ago, and he hasn't gained them back," Blank said. "That's affecting Republicans up and down the ballot."

The president's job ratings from Texas voters have remained relatively constant over time. In the current poll, 49% of voters said they approve of the job he's been doing as president, while 46% disapprove. A year ago, 47% approved and 48% disapproved. In October 2017, three years ago, 45% approved and 50% disapproved.

What looks like an even split disguises a deep partisan divide: 89% of Democrats disapprove of the president's job performance, while 90% of Republicans approve. Independent voters disapprove by a 53%-31% margin.

Asked about the president's response to the pandemic, 45% of voters said they approve and 48% disapprove. And similar splits are evident in approval of the president's handling of race relations: Overall, 43% approve and 48% disapprove. On both topics, as with Trump's overall job rating and his rating on the economy, voters' ratings matched their partisan leanings. On the pandemic, 83% of Republicans said the president is doing a good job, and 87% of Democrats said he's not. On race relations, 78% of Republicans approve of the job Trump has done, while 87% of Democrats disapprove.

Biden's numbers in the new poll are less positive than Trump's: 41% of voters have a favorable impression of the Democrat, while 51% said they have an unfavorable opinion. In February, Biden's ratings were 33% positive and 53% negative. The partisan split is here, too: 80% of Democrats have a positive impression of their nominee, while 87% of Republicans have a negative one. 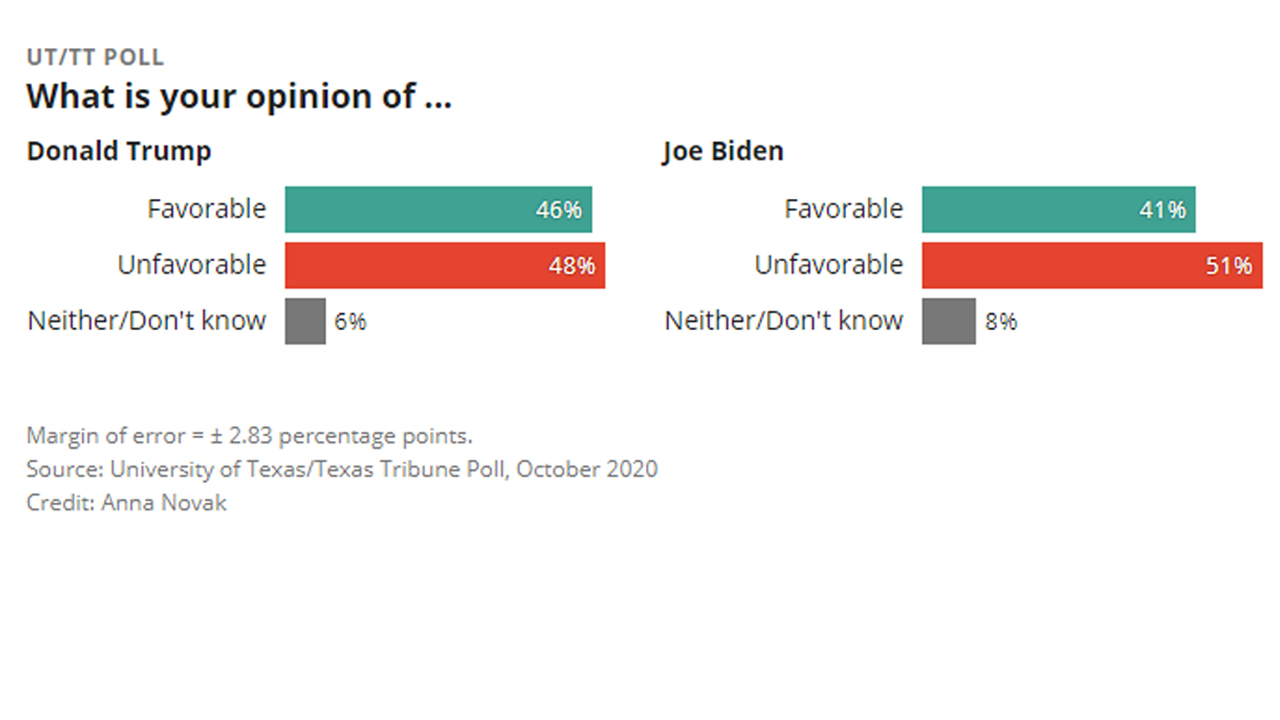 Disclosure: The University of Texas at Austin has been a financial supporter of The Texas Tribune, a nonprofit, nonpartisan news organization that is funded in part by donations from members, foundations and corporate sponsors. Financial supporters play no role in the Tribune's journalism. Find the complete list.