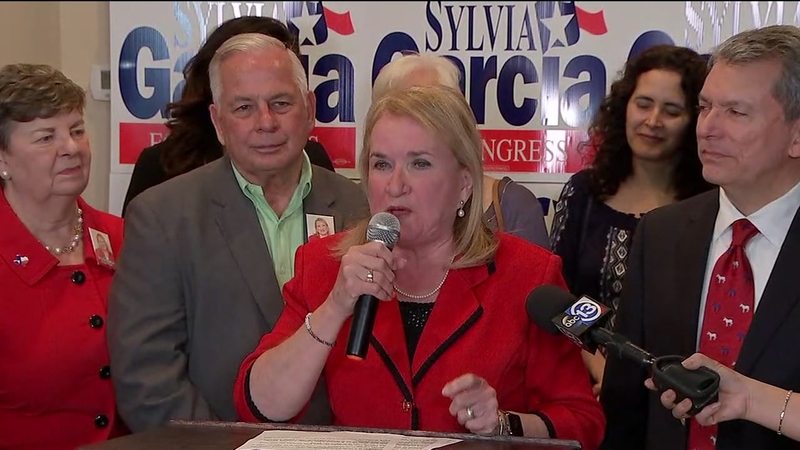 HOUSTON, Texas (KTRK) -- State Senator Sylvia Garcia is poised to join the Texas congressional delegation after a decisive victory at the ballot box.

Garcia was able to edge out six opponents without a runoff for Congressman Gene Green's seat on Tuesday night.

Political analysts say Garcia will now cruise into Congress, taking the reins of District 29 from the retiring Green.

"Tonight, women spoke," Garcia said, in her victory speech. "Tonight we voted and we voted loud and clear. And we said elections can't be bought, and what matters is people. So what matters is fighting on and someone being there willing to fight, willing to stand up, and willing to serve the people, and that's what I intend to do."

Gene Grene ran against Garcia 26 years ago, but tonight it appears she is going to succeed him.

At the watch party in the East End, Garcia supporters were in a celebratory mood, taking photos and making plans of support for the November general elections.

The numbers, trickling in through the night at a slow clip, had Garcia feeling cautiously optimistic.

She reportedly told her supporters not to count the chickens until they hatch, according to Congressman Green. By the numbers, it appears the chickens were good.

Congressman Green, who ran against Garcia for the seat in 1992, threw his support behind the senator in the crowded Democratic race in Congressional District 29.

"The reason I supported Sylvia is she's a legislator, and that's what a member of Congress should be. On the legislative side, it's give and take," Green said. "I have to compromise with my Democrats and obviously my Republican colleagues. She knows how to do that to be successful to represent this district in Washington."
Report a correction or typo
Related topics:
politicshoustonelection 2018senatecongressional racedemocrats
Copyright © 2021 KTRK-TV. All Rights Reserved.
TOP STORIES
14-year-old found shot and killed on Kingwood walking trail
Fall front moves in late Tuesday bringing cooler temperatures
Driver dies after being shot on Westpark Tollway, HPD says
Man accused of killing HPD officer is no stranger to police
Everything we know about the HPD officer killed on duty
1 HPD officer fatally shot, 1 injured while serving warrant
J&J says 2nd dose of vaccine after 2 months results in more protection
Show More
White House looking into footage of Border Patrol agents on horseback
Autopsy set to be performed on Petito; Laundrie remains missing
HPD suffers 5th line-of-duty death in last 16 months
How neuroengineering is helping people fight addiction in Houston
US launches mass expulsion of Haitian migrants from Texas
More TOP STORIES News