What exactly is an 'executive order'? 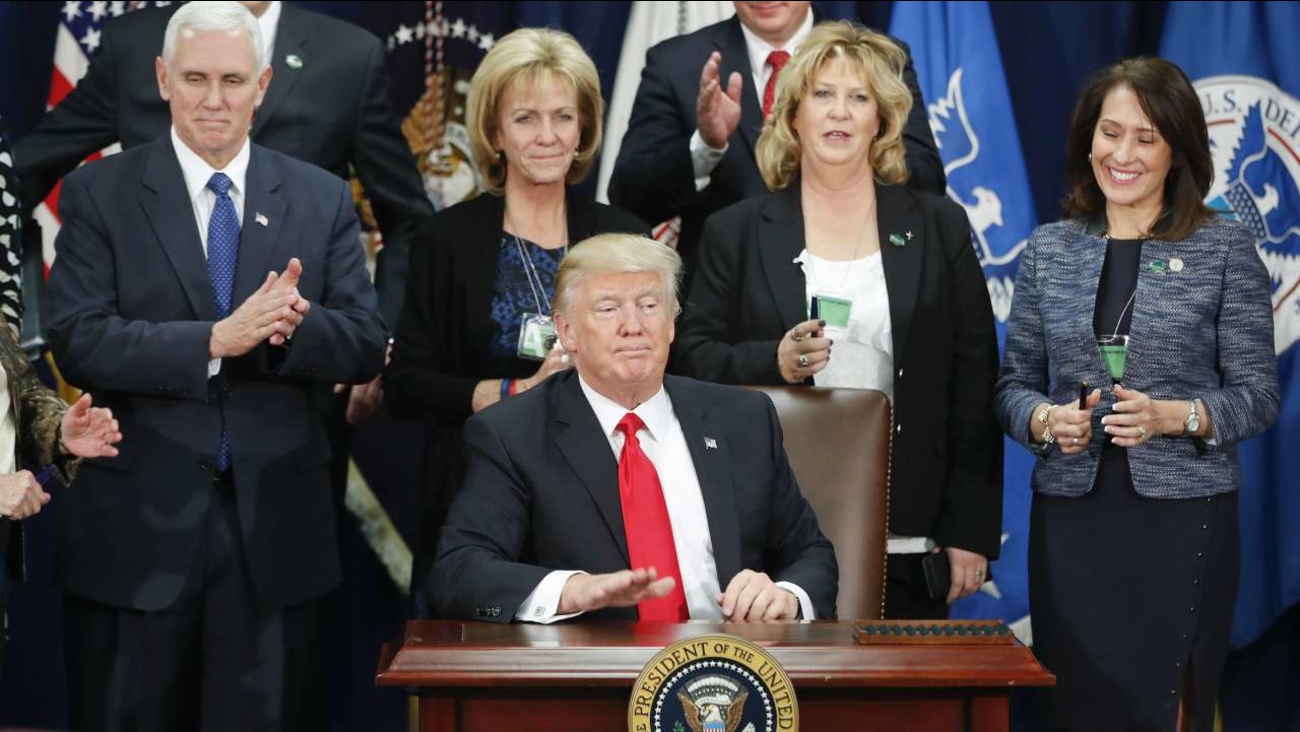 AP
It's the second work week for the Trump administration, and the talk is all about emoluments, executive orders, a border tax, TPP and much more.

If you're rusty on some of those terms, grab this glossary to help get up to speed on what's afoot.

Obama made aggressive use of executive orders, actions and presidential memoranda in his "pen-and-phone" strategy to get around the Republican-controlled Congress that blocked his legislative agenda. With no cooperation from Congress, he pushed his executive powers as far as he could. Now, it's Trump's turn to use executive orders and actions to score some quick victories - in some cases simply by reversing Obama. "You know the great thing about executive orders - I don't have to go back to Congress," Trump said during the presidential campaign. "We're going to be un-signing a lot of executive orders."

Just hours after being sworn in, Trump signed the order targeting Obama's health law. Executive orders only go so far, though. Trump will have to go through Congress to do away with the law for good. On Monday, Trump signed memos freezing most federal government hiring, except for t
he military, and reinstating a ban on providing federal money to international groups that perform abortions or provide information on the procedure. He also signed a memorandum to pull the United States out of the proposed Trans-Pacific Partnership trade pact.

On Tuesday, he added five more to the stack, including documents to: advance construction of the Keystone XL and Dakota Access oil pipelines, require materials for the pipelines to be made in the U.S., streamline the permitting process for manufacturing and expedite environmental reviews.

The proposed Trans-Pacific Partnership is a 12-nation trade deal that was the cornerstone of Obama's attempt to counter China's influence in Asia. Trump's memorandum pulling the U.S. out of the deal was basically a formality since the agreement had yet to receive congressional approval and faced significant opposition in the House and Senate. Trump spokesman Sean Spicer says the new president wants to negotiate bilateral trade deals with U.S. allies rather than joining in big multilateral pacts. Trump has blamed past trade deals such as the North American Free Trade Agreement and China's entrance into the World Trade Organization for a decline in U.S. factory jobs.


Under the Constitution, the Senate has the final say on President Donald Trump's choices for his Cabinet. That includes nominations for 15 department secretaries and six people selected by Trump to lead agencies or serve in roles with Cabinet-level status, such as the EPA and U.N. ambassador. So far, three nominees have been confirmed by the Senate, including CIA Director Mike Pompeo on Monday. With Republicans in control of the Senate by a 52-48 margin, most of the rest are expected to easily win confirmation. Democrats will put up a fight on some, but there's a limit to what they can do. Under rules changes approved in 2013 - when Democrats were in charge of the Senate - Cabinet picks can be confirmed with a simple majority, preventing Democrats from demanding 60 votes to move forward.

Trump also will need Senate approval for his choice to fill a vacancy on the Supreme Court, a selection he hopes to announce next week. He met with Senate leaders from both parties Tuesday to discuss the vacancy. Senate Majority Leader Mitch McConnell referred to the chamber's "advice and consent" role in describing it as "a good meeting."

The first thing to know: The Affordable Care Act is the same thing as "Obamacare." The latter was a nickname coined by opponents of the health law, but President Barack Obama eventually embraced it. The law reduced the nation's uninsured rate to a historic low of around 9 percent but failed to win broad public support. With Republicans in control of both the White House and Congress, undoing the law is a top priority for Republicans. But lawmakers aren't sure what should take its place.

In the meantime, Trump has signed an order that gives federal agencies broad leeway to chip away at the measure. The law requires individuals to carry health insurance or face fines, and provides subsidies to help people who can't otherwise afford insurance. Trump has said he wants to keep some of the measure's more popular provisions, including allowing young people to stay on their parents' insurance until age 26 and preventing insurance companies from denying coverage to people with pre-exiting conditions. But critics say Trump can't cherry-pick to keep popular portions of the law and get rid of the requirement for everyone to have insurance. Democrats say that requirement, called the individual mandate, is what pays for expanded coverage.


Trump said Monday there will be advantages for companies that make their products in the United States and suggested he will impose a "substantial border tax" on foreign goods entering the country. There are lots of questions about exactly what he wants, though.

House Republicans are pushing a so-called border-adjusted tax that would exempt a company's exports from taxation but include imports. That could encourage companies to remain in the U.S. Trump has said he "doesn't love" the tax, calling it "too complicated." Confusing matters, he has also threatened companies that shift jobs overseas with a "border tax" on their products. His nominee for treasury secretary says Trump is referring to a more specific levy on those companies that outsource jobs, rather than the House Republicans' broader proposal.

Article 1, Section 9 of the U.S. Constitution prohibits any "Person holding any Office of Profit or Trust under (the United States)" from accepting "any present, Emolument, Office, or Title, of any kind whatever, from any King, Prince, or foreign State." This clause was designed to prevent foreign interference in the U.S. political system by ensuring that foreign powers don't curry influence by knighting U.S. officials or giving them gifts, money or other things of value.

The liberal-funded watchdog group Citizens for Responsibility and Ethics in Washington filed suit against Trump on Monday for violating the emoluments (ee-MOLL'-you-ments) clause, alleging that Trump's business interests "are creating countless conflicts of interest, as well as unprecedented influence by foreign governments." Trump said the suit was "without merit." His advisers say there is no conflict of interest in fair-value exchanges such as accepting payment for hotel rooms or office space.