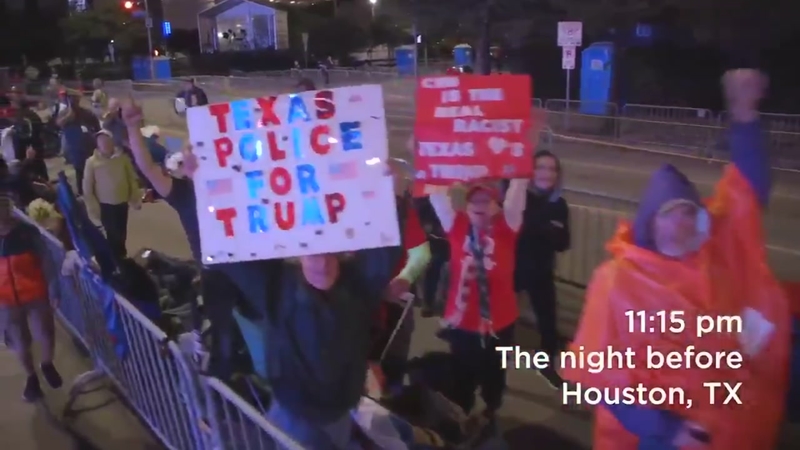 Trump fans lined up more than 18 hours before rally

HOUSTON, Texas (KTRK) -- Supporters started lining up more than 24 hours ago, bringing chairs, inflatable furniture, and were ready to wait for this historical rally.

Many snaked around the barriers in a line through the streets surrounding the Toyota Center in downtown Houston.

"Hopefully I can get close enough to take a selfie with him," said Thomas Rodriguez, referring to President Trump and the MAGA rally he was about to walk into.

The Ross family traveled from Matagorda County and represent three generations. Ashley Ross says she brought her son Gavin and said, "He's into politics, government and U.S. history and loves his country. I thought this would be a perfect day to spend for him. He's definitely made a huge impact on American already, and he's going to do that for the next two years and hopefully for the next six."

Scattered along the lines of people, there were tables of Trump shirts, hats, flags and signs.

There was even a "swagon" full of Trump memorabilia for sale.

"A lot of women for Trump. I sold out of the pink and all I have left is red," another vendor said.

Thousands of supporters in the crowd drove from Houston and its suburbs, but others traveled for miles and hours to get here.

Clark McGee from Dallas said, "I've never been, I've donated money to the campaign and gotten my autographed book. I want to expand my cultural horizons and man I am today. Everyone is like-minded, happy to be here."

"I came from Colorado Springs and drove 14 hours to get here, slept a few hours and (made a) turn-around from San Antonio to be here by 7 a.m. It's very important. We always talked about being here if he ever came back through Texas," Roma Vandebark said.