Thousands of migrants face weeks of waiting in Tijuana 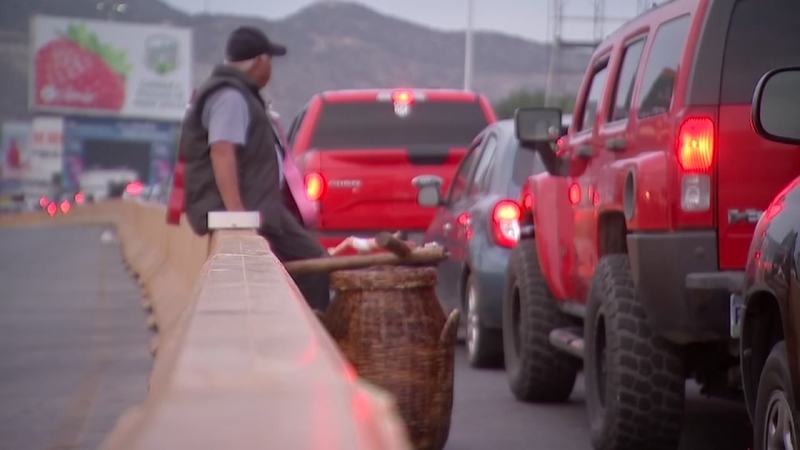 Migrants at border may have to wait weeks before asylum hearing

TIJUANA, Mexico -- Many Central American migrants camped in Tijuana after crossing Mexico in a caravan said Monday that a protest over the weekend by residents demanding they leave frightened them and left them even more anxious while they try to get into the United States.

The angry protests have been fed by concerns raised by President Donald Trump's month-long warnings that criminals and gang members are in the group and even terrorists, though there is no evidence of that.

About 500 people demonstrated in an affluent section of Tijuana on Sunday against the caravan. Dozens of protesters then marched to an outdoor sports complex near downtown where 2,500 migrants are staying, sleeping on dirt fields and under bleachers after arriving at the border city a week ago.

A Tijuana police officer saw them in the crowd and helped them get out and behind police tape marking off the block where the sports complex is located. The protest eventually ended peacefully. On Monday, a Mexican holiday, streets were quiet with many businesses near the complex closed.

Tensions have built as nearly 3,000 migrants from the caravan poured into Tijuana in recent days after more than a month on the road - and with many more months likely ahead of them while they seek asylum in the U.S. The federal government estimates the number of migrants could soon swell to 10,000.

Mexico's ambassador to the U.S., Geronimo Gutierrez, told reporters Monday that the situation is a "wake-up call" for the U.S., Mexico and Central America that could force the region to work together to address the difficult issue of immigration.

U.S. border inspectors are processing only about 100 asylum claims a day at Tijuana's main crossing to San Diego. Asylum seekers register their names in a tattered notebook managed by the migrants themselves that had more than 3,000 names even before the caravan arrived.

For most of this city of 1.6 million, the arrival of thousands of Central Americans is not noticeable. Most migrants stay within a three-block radius of the sports complex that faces the towering metal walls topped with barbed wire at the U.S.-Mexico border.

But many residents fear with the passage of time their presence will take its toll and crime could go up. Since 2016, thousands of Haitians who also tried to get to the U.S. ended up settling here, while at the same time, Tijuana has taken in thousands of Mexicans deported from the United States.

Tijuana also has been struggling with drug violence and some say they do not want the caravan bringing more problems.

Sandra Lucia Montanez, 28, a Tijuana psychologist, said news reports last month of Central Americans storming Mexico's southern border fed the fears. But, she said, it's important that Tijuana not forget it is a city of migrants.

"Almost no one here is from Tijuana," Montanez said. "We have to help the neediest ones. They come from countries with a lot of poverty. Honduras is worse off than Mexico."

The United States has dramatically increased border security in preparation for the caravan's arrival, closing lanes at ports of entry to place cement barriers topped with razor wire that can be quickly moved to block passage should there be a mass number who try to force their way into the country.

But the lane closures have also made it harder for cross-border residents to go back and forth into the U.S. to work and shop. The San Ysidro port of entry is one of the world's busiest border crossings, with more than 40,000 vehicles and 34,000 pedestrians using it daily.

On Monday, U.S. authorities closed off northbound traffic for several hours and closed a pedestrian lane at the crossing to install more security barriers, after a tip that people were gathering in Tijuana to rush the border checkpoints.

"Waiting until a large group of persons mass at the border to attempt an illegal crossing is too late for us," said Pete Flores, director of field operations for Customs and Border Protection in San Diego.

Demonstrators at Sunday's protest complained that some migrants have been aggressive, yelling insults at U.S. Border Patrol agents and climbing walls and getting into fights at Tijuana's Pacific beach.

But Tijuana police officer Victor Coronel, who has overseen security outside the sports complex where the migrants are staying, said those fears are based on the bad behavior of only a handful of migrants.

Coronel said he hopes as time passes, many will opt to go home or find jobs in Mexico and integrate into society.

Lesbia Navarro, 36, stayed inside the stadium with her four children ages 3 to 16 as they listened to the shouts and insults from the protesters Sunday.

"We only want to be here awhile, until we can get into the United States to work," said Navarro, of Choloma, Honduras. "We don't want to cause anybody problems."

The Tijuana protests came amid what may be a hardening of positions in some northern Mexican states against the migrants. In Jalisco state, which the caravan passed through on its way to Tijuana, officials said they would no longer open shelters, citing problems with fights involving migrants last week.

Instead, the state will provide water, some food and escorts at nine points along the main highway through the state to help ensure the migrants don't have to stop.

Tijuana Mayor Juan Manuel Gastelum has called the migrants' arrival an "avalanche" that the city is ill-prepared to handle, calculating that they will be in Tijuana for at least six months as they wait to file asylum claims.

Gastelum has appealed to the federal government for more assistance to cope with the influx - while more migrants continue to head to the U.S.-Mexico border.

Trump used Twitter on Sunday to voice support for the mayor. He wrote that like Tijuana, "the U.S. is ill-prepared for this invasion, and will not stand for it. They are causing crime and big problems in Mexico. Go home!"

He followed that tweet by writing: "Catch and Release is an obsolete term. It is now Catch and Detain. Illegal Immigrants trying to come into the U.S.A., often proudly flying the flag of their nation as they ask for U.S. Asylum, will be detained or turned away."

Barbed wire fences have gone up near the U.S.-Mexico border.

The governor of the Mexican state of Veracruz is offering to erase hundreds of miles off the journey to the U.S. border for Central Americans traveling in the migrant caravan.