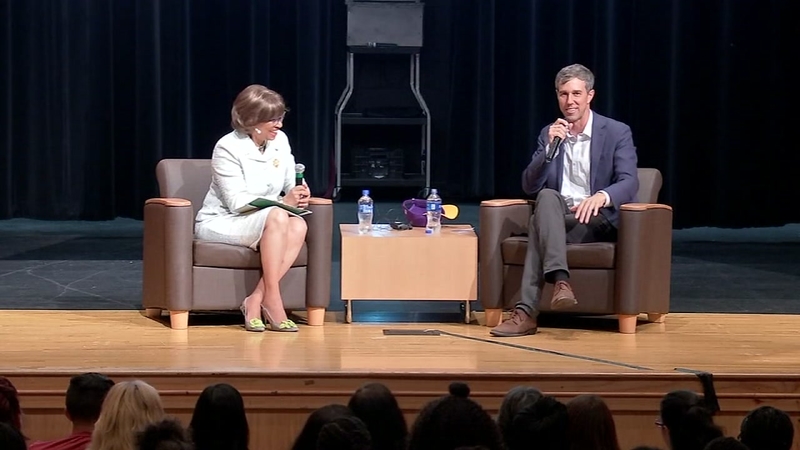 PRAIRIE VIEW, Texas (KTRK) -- With 48 days separating Texans from the polls, Senate hopeful Rep. Beto O'Rourke came through Prairie View A&M University on Wednesday night, fulfilling a pledge he made to one of the students.

"I remember this year we had a town hall at Hempstead and a Prairie View student said, 'Will you come to campus?'" O'Rourke told media members when he arrived on campus. "I'm following through on that promise I made."

The O'Rourke campaign event was highly anticipated. According to student government leaders, the more than 700 tickets allotted to students for the appearance were all spoken for in two days.

Prairie View's student government association and the nonprofit The Links, Incorporated reached out to both O'Rourke and Cruz. The Democratic candidate was the first to reply.

"I think it's beautiful for him to be coming to an (historical black college/university)," said student Domonique Roy.

Students like Roy say it was important to have the candidate here addressing questions from students of HBCU campuses, as many are still deciding who they will vote for.

Many had specific questions about equality, advancement and even student debt.

"Endowments are not at the level they need to be here. Yet we don't have full funding to insure cost is not an object to every young potential student who wants to better themselves by coming to Prairie View," O'Rourke told the crowd.

We spoke to the El Paso congressman about a new poll showing him leading Cruz by two points.

He didn't seem to care much about the numbers he is seeing. What matters to him, he says, is listening to everyone's concerns and hoping people head to the polls and make their voices heard.

"We can win this and it will be up to the people of Texas. Future, fate and fortune," he said.

ABC13 and Univision 45 are hosting a debate between Cruz and O'Rourke on Sunday, Sept. 30 at 6 p.m. We invite you to submit questions to the candidates.