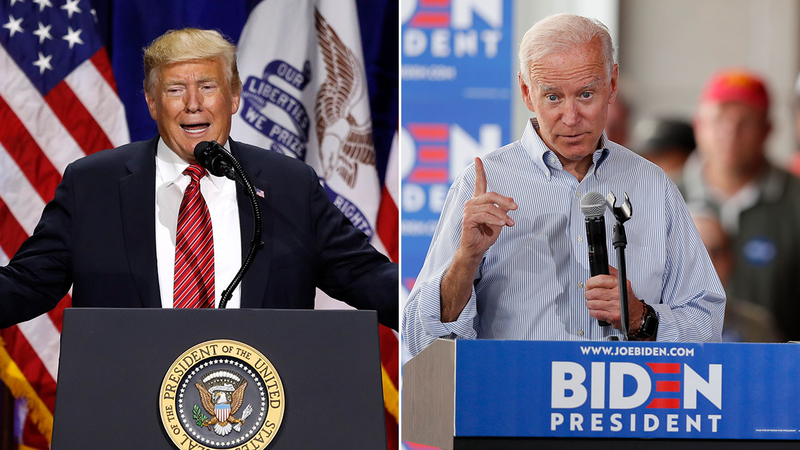 One year before the nation votes, top Democratic contenders have extended their leads over Donald Trump in the 2020 presidential race, with broad public concerns about the president's leadership in the latest ABC News/Washington Post poll.

While Joe Biden now leads Trump by 17 percentage points, other Democratic contenders show the most improvement: Bernie Sanders' advantage vs. Trump has gone from a non-significant 6 points in July to 12 in September to 17 now. Elizabeth Warren's has gone from 7 to 11 to 15 points.

Impeachment is not the only factor, since the trend dates to early September. Among Trump's broader challenges, six in 10 Americans or more say he's not honest and trustworthy, lacks the kind of personality and temperament it takes to serve effectively and doesn't understand their problems. Slightly smaller majorities doubt his deal-making, delivery of "needed change" to Washington and leadership generally.

Further, as reported last week, half support Trump's impeachment and removal from office, 54 percent say his policies have made the United States less respected globally, 58 percent disapprove of his overall job performance and 66 percent say he's acted unpresidentially since taking office. He's the first president in modern polling never to have achieved majority approval, with the lowest average approval rating on record.

Yet Trump faced difficulties in 2016 and still prevailed in the Electoral College, if not in the popular vote. He remains strong in his base in this poll, produced for ABC by Langer Research Associates, with 70 percent support among conservatives vs. Biden, 76 percent among evangelical white Protestants and 79 percent among Republicans and Republican-leaning independents.

The Democrats have risks of their own. Their support is heavily concentrated in a handful of groups - for example, young adults, those with more education, racial and ethnic minorities, people living in urban areas and those in the states Hillary Clinton won in 2016. Biden is +30 points vs. Trump in those blue states, for example, while just +7 points - not a statistically significant difference - in the 2016 red states.

That said, 16 percent of leaned Republicans say they'd defect to Biden. Trump's approval rating within his own party has dropped by 13 points since early July to a new low. And 30 percent of Republicans and Republican-leaning independents say they'd like to see the party nominate someone else as its 2020 presidential candidate. (In a different question in 1995, two in 10 Democrats preferred not to renominate Bill Clinton.)

Trump's presumed ace in the hole is the economy, and his fortunes may rest on its durability. As things stand, though, just a third of Americans, 34 percent, both say it's improved since he took office and give him at great deal or good amount of credit for it.

Elections are comparative and, given the Electoral College, strategic; even a poorly rated candidate can defeat a weak opponent, as Trump demonstrated in 2016. As such, his chances in 2020 depend not only on his ratings, but on the eventual Democratic nominee's as well.

Leading Democrats currently have the upper hand. Among the party's three frontrunners, Biden and Sanders lead Trump by an identical 56-39 percent, as does Warren, by 54-39 percent. Pete Buttigieg and Kamala Harris both hold 11-point leads.

Those results are among all adults, given that there's plenty of time to register. Among currently registered voters, the outcomes are very similar - Biden ahead by an identical 17 points, Warren still by 15, Sanders by 14, Buttigieg still by 11 and Harris by 9. The results look different than at about this time in 2015. In an ABC/Post poll that September, Hillary Clinton led Trump by 12 points, 51-39 percent, in a matchup among all adults, but it was essentially a dead heat, 46-43 percent, among registered voters.