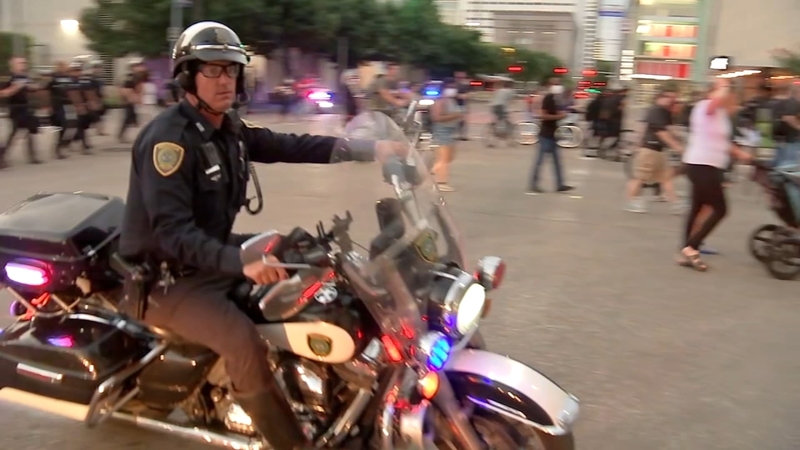 HOUSTON Texas (KTRK) -- Customers who arrived at Deerbrook Mall on Sunday were met with barricades and police vehicles blocking all entrances. The mall closed early "due to possible looting," according to the police department's Facebook.

A mall employee said, "We did talk to security today. That said, there were threats being made and they were heightening security."

A statement released by the company said it's monitoring situations unfolding in cities across the country. It will base "the opening or closing of stores on the needs of the communities."

The Houston area stores that closed earlier include South Wayside in Houston, one in Lake Jackson, and one in Sugar Land.

The Galleria closed Sunday after a group of people reportedly smashed a storefront window at Forever 21. According to HPD Chief Art Acevedo, there was also a burglary at a Best Buy in north Houston.

Looting and destruction has been part of protests in other large cities. Saturday night, stores in the Melrose Place section of Los Angeles were looted and some were set on fire as crowds of people marched, protesting the death of George Floyd by a Minneapolis police officer who was fired, and charged in the Houston native's death.

In Houston, some 400 arrests were made Friday and Saturday as demonstrations occurred downtown. A Verizon store was cleaned out by looters, and several small businesses were damaged. Most of the arrests were said to have been for obstructing traffic, several for assaulting police officers, and a small number for carrying weapons.

Mayor Sylvester Turner said the majority of those arrested were from Houston, rather than contingents of people coming in from other cities and states to create chaos.

Turner has consistently stated that the city supports protestors in their right to voice anger and grief over Floyd's death, but he has also been committed to keeping those demonstrations peaceful, while protecting the public and property. "We don't want to arrest anyone, but if you cross the line, then, yes you will be arrested."

All HPD officers were called in, and worked 12-hour shifts.

Both the mayor and police chief said they have open communication with march organizers, who can warn them of possible problems before they develop into something more.

Unlike many other cities in Texas and across the country, Houston has not seen major looting and destruction.

"At the end of the day, we're proud of our community and the Floyd family," said Acevedo. "They don't want anybody to come and hijack their pain and turn the conversation away from police abuse, and criminality and George."