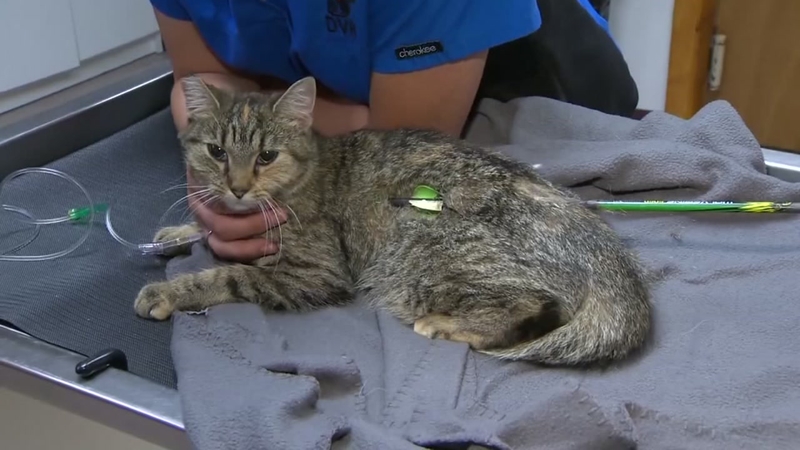 Pittsburgh, PA (KTRK) -- A lucky feral cat found her way to a woman's porch after being shot with an arrow.

The woman inside got her safely to the vet.

Now, the search is on for the shooter.

Cat shot with arrow. #WTAE tonight. What is wrong with people? pic.twitter.com/XBxd5hxW65

Her rescuer has only one name for her.

"I've been calling her Cutie because she's just got that face," Carrie Keffer told WTAE.

The veterinarian and technicians at Dravosburg Veterinary Hospital call her Catniss.

They all call her lucky.

"And I happened to open up the door and she was laying on my porch and at first glance, I thought it was a raccoon because she's a little gray tabby, and then I seen the arrow sticking out of her," Keffer explained.

Keffer has a heart for cats in Clairton, Pennsylvania.

The tabby was already spayed but, she was feral, meaning she didn't have an owner.

While the vet works to get that arrow out and stabilize the cat, they all wonder at the capacity for cruelty that exists in some.

"How would they like we did that to them? Shoot them with an arrow and let them sit, all night long," Keffer said.

"It's hard, you know we see some pretty crappy things, but, this pretty much topping my list," Dr. Mendolwitz said.

The humane officer wants to hear from anyone with clues into this attack.

As for if Gaydos-Behanna thinks this is obviously intentional?