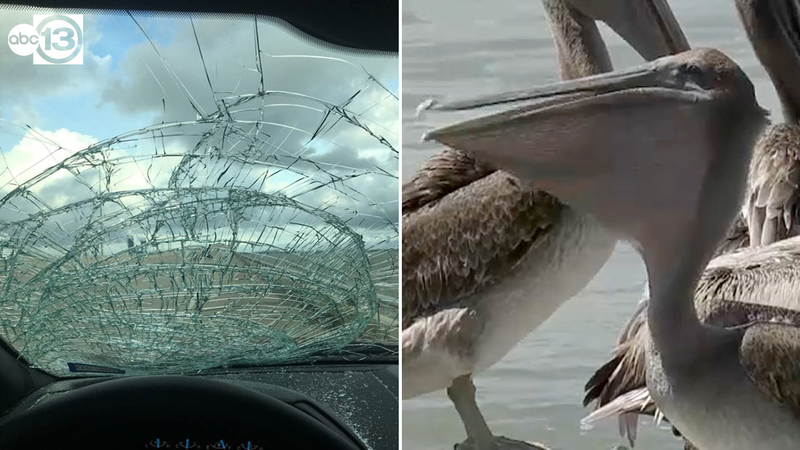 Pelican smashes into Galveston County family's windshield while on the causeway

GALVESTON, Texas (KTRK) -- Strong storms created a scary situation for some drivers along the Galveston Causeway on Wednesday, as they suddenly saw birds falling from the sky.

It's a sight Shane Long's wife experienced as she entered the causeway that night.

"I guess the wind was really, really strong, and they were just struggling coming over the causeway," Long recalled. "It was forcing them down."

Long is talking about Brown Pelicans. He says his wife was driving when suddenly the bird flew into her windshield.

"She had shards of glass on her lap and just little pieces," he recalled. "She had to come home and we got her in the shower to get that off."

It's an accident Moody Gardens animal husbandry manager Greg Whittaker said is uncommon, but could certainly happen because of the weight of the bird.

"If you could imagine your family's turkey on Thanksgiving. It's a fairly hefty body mass, and if you encounter that at 60 or 70 miles per hour in a vehicle, it can cause some damage," Whittaker said.

Pelicans rely on wind patterns. You can see them glide along the causeway. The animals live on a island not far from the bridge, and right now, they are flying across it to get food for baby chicks. If you're coming to the island this summer, Whittaker urges you to be aware.

Storms can impact flight. Right now, there are more pelicans than ever before, with about 10,000 on the bird island.

"It's just this time of year when there's more numbers of them, there are more numbers of our visitors visiting our island and coming across the causeway, and it's kind of a numbers game," Whittaker said.

It's an encounter Galveston drivers said they want to avoid.

"I'm done," said motorist Brian Holloway. "I'm pulling over. I'm getting the heck out of the car. It would be terrifying. We're fortunate here that most of the birds are normally in the air, but during these storms, we've seem them crash over at East Beach."

It's a crash the Longs know can happen on the causeway as well.

"We'll be watching for them now," Long said. "We'll be a little bit more cautious when we're going across there."

Caw! Caw! A band of blackbirds has joined forces to wreak havoc on a California town