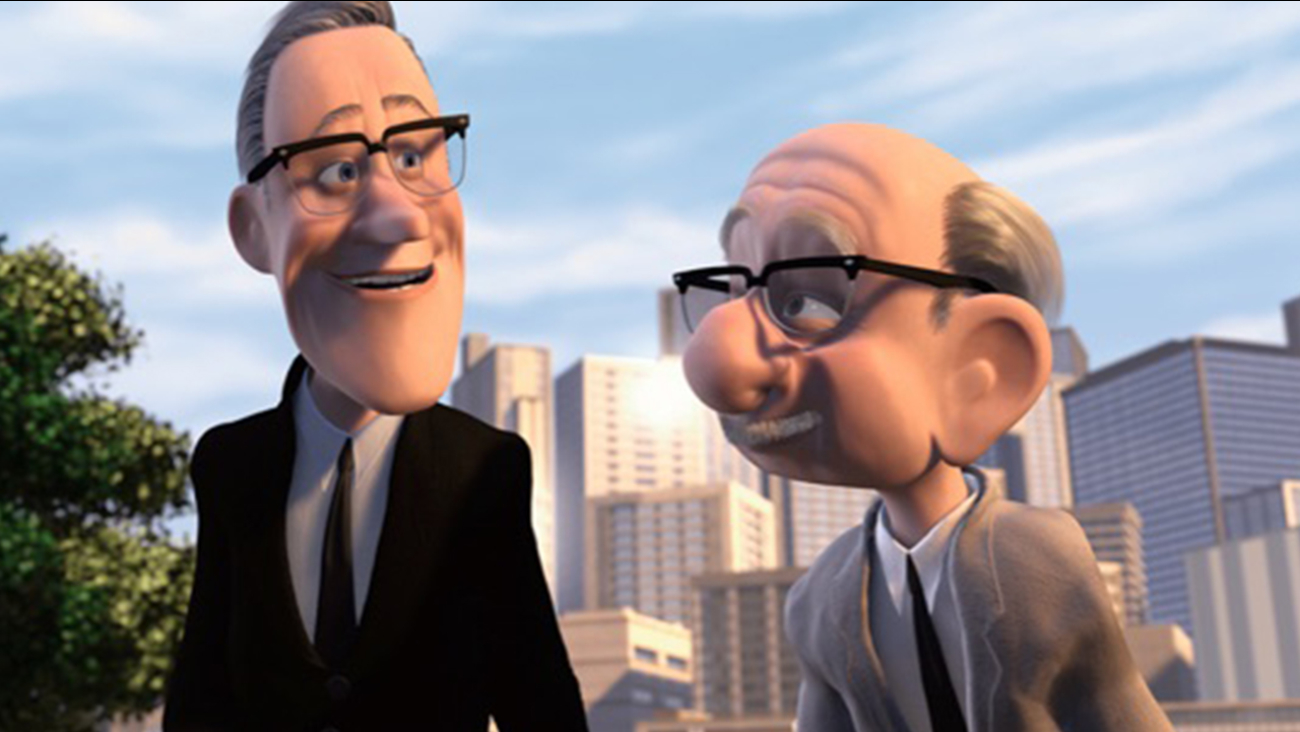 This story originally appeared on Oh My Disney and is reprinted with permission.

How do animators breathe life onto a blank canvas? How do they get us to laugh at Pascal, sympathize with Carl, and feel the longing of Ariel wanting to be part of your world? How do they make us believe that the things they've rendered are actually alive?

As Frank and Ollie say in their cameo at the end of The Incredibles (Yes, that was them!), "There's no school like the old school!" Take a journey through Disney and DisneyPixar's wonderful world of animation and see how these classic principles have influenced some of your favorite films today!

1. Squash and Stretch - The squash and stretch principle gives the illusion of weight and volume to a character as they move. This is done by expanding and compressing the character's body. To see the principle in action, take a look at this scene from the Pixar short Day and Night. Notice how as the two characters dance around, their shapes compress ever so slightly and then stretch back into shape. As a result, we as an audience actually believe that they are dancing because we see the impact that gravity has on their bodies.

2. Anticipation - Anticipation is used to let the audience know that a major action is about to take place. To do this, animators will often work in a smaller action or two, right before the major action to signal that something is coming. Notice how Thumper draws back his leg before breaking into a run? This is anticipation in action!

3. Staging - Staging is the principle that every pose or action that a character makes should convey a clear intention. Take these images of Tinker Bell for instance. If you were to isolate Tink and make a silhouette of each of her poses, you would still be able to get the idea that Tink is overjoyed in the first pic, annoyed in the second pic, and feeling the zzzs in the final.

Staging also applies to the movement and placing of the camera. In this scene from Finding Nemo, the swirl of the water directs the audience to the totally sweet action where they are supposed to be looking in that moment.

4. Straight Ahead and Pose to Pose - Straight ahead and pose to pose refers to the techniques by which animation is crafted. The pose to pose technique involves drawing the key poses that you'd like the character to take first and then filling in the transitional poses second. The straight ahead technique is more nuanced and involves an animator literally crafting one frame after another, as in this early draft of an iconic Cinderella scene.

Straight ahead is better for creating fluid, realistic actions while pose to pose is more effective for dramatic or emotional scenes where it's more about conveying an idea than a sense of realness.

5. Follow Through and Overlapping Action - The follow through principle argues that when a character is in action and stops, nothing stops all at once. So when a character is running and stops, their main body will stop, but the other parts of their body will keep moving for a bit after. For instance, in this scene, Mulan's head stops first and then her hair.

Tied to this idea is the overlapping action principle, which expresses the idea that if a character is in motion, some parts of the character move faster than others. In this Tangled scene, notice how Rapunzel's hair moves faster than her body.

6. Slow-In and Slow-Out - Slow-in and slow-out is another principle designed to add realism to the movement of characters. When characters are performing actions, animators will draw more frames at the start of the action, less frames in the middle, and more frames again at the end of the action to create this slow-in/slow-out effect. (Kind of like a pendulum!) Notice how Snow White's actions in this scene are slow at the beginning and fast in the middle and then slow at the end.

7. Arc - The arc principle is that almost all actions in life have a slightly circular motion. When a head turns or an arm moves, rarely will it thrust straight in and straight out. Often it will have a little curve to it. This Mickey GIF does a great job of illustrating this!

8. Secondary Action - A secondary action is an additional action that reinforces and adds more dimension to the main action. The main action in this scene is Bolt's mouth and the carrot, but the animators also threw in some adorable secondary leg action to reinforce the cuteness of the scene.

9. Timing - Timing helps create the illusion that an action is abiding by the laws of physics. By adjusting the timing of a scene, animators can make that scene look either slower and smoother (with more frames) or faster and crisper (with less frames).

10. Exaggeration - Exaggeration is all about overstating certain movements in a way that helps evoke a point, yet doesn't ruin the believability of the scene. As you can probably guess from the previous GIFs, Disney is pretty darn good at this. But just in case you forgot, and also because we can't help ourselves, here's another prime example.

11. Solid Drawings - This principle encourages animators to be mindful of the fact that while forms may be presented in 2D, they should strive to look 3D. In this example, despite being drawn in 2D, through the animation choices we as an audience feel that Zeus has weight and is three-dimensional.

12. Appeal - Obviously, not every character should be appealing. But this principle posits that animators should strive to create images that will be interesting and compelling to audiences.

And there you have it! The 12 essential principles that make animated films so magical! There's no doubt that animation would not be what it is today without these twelve pieces of wisdom. We can't wait to see how future Disney animators use and innovate on these principles in their works to come!

Interested in becoming an animator in the future? Working in the industry now? Share your experiences with the 12 principles of animation in the comments!