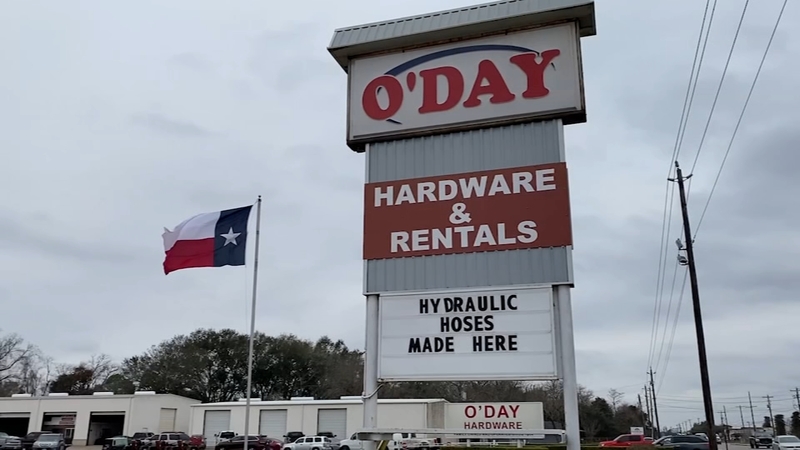 O'Day Hardware is there after every disaster

PEARLAND, Texas (KTRK) -- Pearland's O'Day Hardware has seen a lot of natural disasters since its start in 1984, but this week's frigid temperatures aren't something the store, or its customers, are used to.

"We haven't seen a freeze like this since 1989," said owner Suzanne Elliott. "We've had some unpredictable hurricanes, but we have not seen a freeze of this magnitude in over 30 years."

The store was without power for much of the week, so they stayed closed until Wednesday. Upon their reopening, Elliott said most of the activity at O'Day took place around the aisles selling copper and PVC pipe.

"I had water damage and broken pipes," said Rosharon resident Michael White. "I'm trying to find stuff to piece back my life."

Elliott says they had over a thousand customers on Wednesday, with people from all walks of life suffering damage to their homes, businesses, and equipment.

"Everybody was helping each other out," Elliott said. "Neighbors help neighbors."

In addition to selling hardware, O'Day also makes sure customers are able to have their home-improvement questions answered. Gordon Johnson has worked at the store for decades, and has earned the nickname "Mr. Fix It."

"We're here to serve people," said Johnson, who recommends customers bring in photos of their damage so he'll know what they'll need for repairs.

At the end of the day, O'Day wants to help get Pearland under repair, and serve their community.

"The only reason we're here is because of this beloved Pearland community," said Elliott.