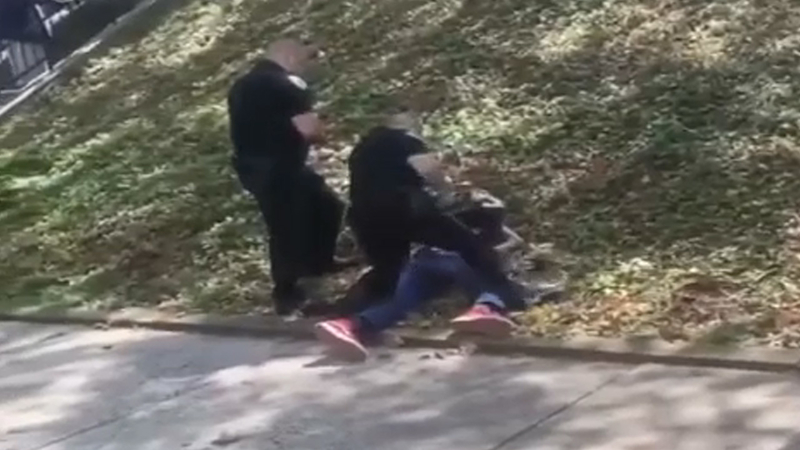 NEWARK, New Jersey -- Two police officers in New Jersey have been suspended following the arrest of a 15-year-old that was caught on camera and shared around social media.

The officers, who work for New Jersey Institute of Technology, are on administrative leave after the off-campus arrest in Newark.

A 27-second clip was posted on Twitter with the caption "If this happened to u at the age of 15 for not stopping what would u do?" In fact, you can hear the officers explain the teen is being stopped for a bicycle offense.

"We were attempting to make a bike stop before you took off on us," one officer says. "We have to cuff you. Shut your mouth!"

In a written statement, NJIT confirms there was on off-campus incident involving a juvenile and that "the circumstances of this matter are troubling, and NJIT has launched an investigation that will include the involvement of an independent law enforcement agency." (full text of statement below)

Jeremiah Richardson is moving into his dorm for the year, right across the street from where the incident took place.

"The population on campus is now going to feel unsafe, and we shouldn't have to feel like that when we just live here," Richardson said.

Here is the full text of the NJIT statement:

"There was a concerning incident on Monday, August 26 involving a juvenile who was apprehended off campus by two of our university police officers. The circumstances of this matter are troubling, and NJIT has launched an investigation that will include the involvement of an independent law enforcement agency. While that investigation proceeds expeditiously, we are conducting a review of pursuit procedures and training and have placed both involved officers on administrative leave. NJIT is part of a larger community, and our university's partnership with the City of Newark and our shared community is critically important. That relationship is strong thanks to mutual respect and proactive, positive engagement efforts, some of which are led by our Office of Public Safety. We will continue to work in partnership with the City and Newark's community members. We will investigate this matter thoroughly and take all appropriate actions as soon as the investigation is complete."
Report a correction or typo
Related topics:
new jerseyarrestsocial mediau.s. & worldrutgers university
Copyright © 2022 WABC-TV. All Rights Reserved.
TOP STORIES
19 children, 2 adults killed by gunman in TX school shooting
Uvalde school shooting: What we know about 19 kids, teacher killed
Weather Alert Day: Strong storms will blow through early Wednesday
Election 2022: Full results from Texas primary runoff elections
How to talk to kids about Texas school shooting
Watch Steve Kerr's raw, emotional plea after Texas shooting
Biden to sign policing order on anniversary of Floyd's death
Show More
New documents reveal possible motive in Vanessa Guillen's murder
Gun violence activists demand action addressing mass addressing
Texas leads nation in school shootings since 2013, data shows
Bodycam footage released of man shot by HPD officer in late April
A look at some of the deadliest US school shootings
More TOP STORIES News