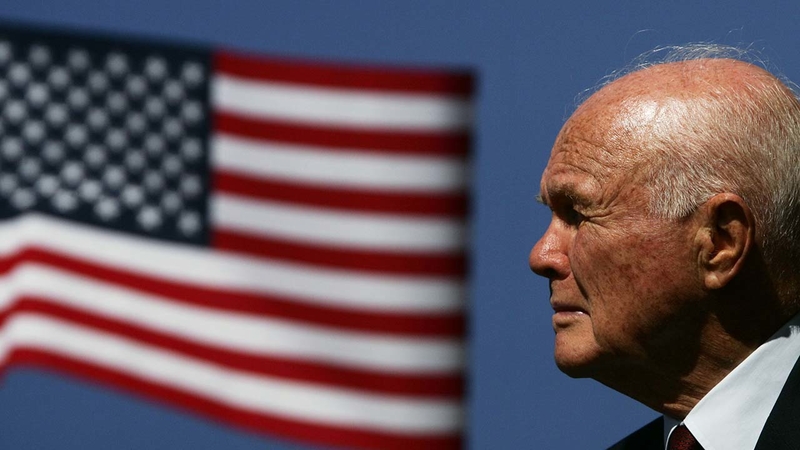 The world reacts to the death of John Glenn

People across the world are reacting to the death of the first American astronaut to orbit the earth, John Glenn.

"Today, the people of Ohio remember a devoted public servant who represented his fellow Buckeyes in the U.S. Senate for a quarter century and who fought to keep America a leader in science and technology," President Obama said in a statement. "Our thoughts are with his beloved wife Annie, their children John and Carolyn and the entire Glenn family. The last of America's first astronauts has left us, but propelled by their example we know that our future here on Earth compels us to keep reaching for the heavens. On behalf of a grateful nation, Godspeed, John Glenn."

JUST IN: President Obama on the passing of former astronaut and Senator John Glenn: "Our nation has lost an icon." https://t.co/Kv3RfVyyOz pic.twitter.com/bFlPUVTBY0

"Today we lost a great pioneer of air and space in John Glenn. He was a hero and inspired generations of future explorers. He will be missed."

"John Glenn is, and always will be, Ohio's ultimate hometown hero, and his passing today is an occasion for all of us to grieve. As we bow our heads and share our grief with his beloved wife, Annie, we must also turn to the skies, to salute his remarkable journeys and his long years of service to our state and nation."

Saddened to hear of the passing of a US hero/astronaut/statesman. His courage inspired a generation to explore & serve. Godspeed John Glenn

Saddened by the loss of my former astronaut colleague John Glenn. Was very honored to have known him. #Godspeed, John Glenn. pic.twitter.com/IRKGJNqYJQ

Today, we join the world in mourning the passing of legendary astronaut, senator and Ohioan John Glenn. https://t.co/L66WmMJgHi pic.twitter.com/ny3NPpm0nk

A great American, a life of service, an inspiration to us all. Goodbye, John Glenn. Godspeed. pic.twitter.com/duCA8qPYER

John Glenn’s humility and grace made his life achievements even more moving. Our hearts go out to his entire family. pic.twitter.com/GjzAogv6Gy

The Corps lost a legend today.

Col. John Glenn— an astronaut, a senator, a Marine— died at the age of 95.

Glenn was one of the original seven Mercury astronauts. His career included two space flights, 24 years as a U.S. Senator from Ohio, and run for president of the United States.

John Glenn was the first American to orbit Earth during the daring days when we were just beginning to venture beyond the atmosphere. RIP. pic.twitter.com/lcaJOxb0Tc

John Glenn was a true American hero, a great public servant and a great man who I was blessed to call my friend.

He inspired us to reach for the stars, and now we sadly return him to them. Let's honor his hope and dedicate ourselves to the good of all. pic.twitter.com/bz5fqQw05x