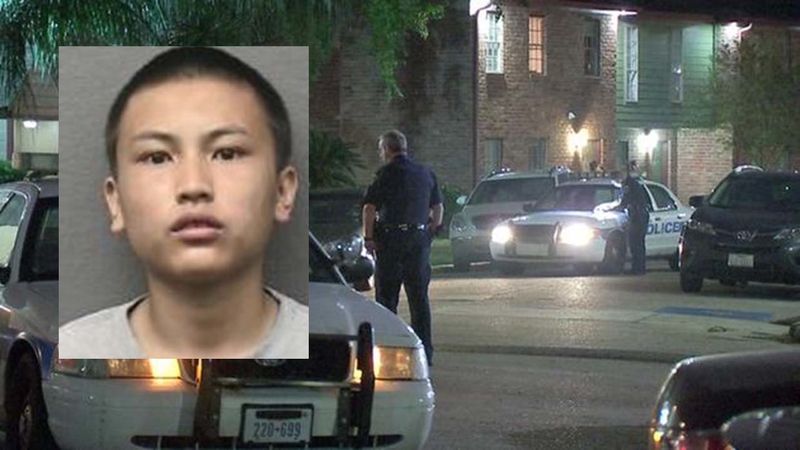 HOUSTON (KTRK) -- Houston Police are looking for a carjacking suspect who left his victim for dead Monday night at a west side apartment complex.

The suspect is considered armed and dangerous.

The carjacking happened at the Nottingham Village apartments off Kimberley Lane.

We spoke to the people who heard the gun shots and tried to help that victim.

Witness Elie Kalwahali said, "I thought he was choking or something."

Kalwahali pulled into the parking lot just after the shooting. He saw 20-year-old Kewin Kaewprasit, the victim, lying on the ground and ran over to help.

Kalwahali said, "Neighbors started coming down and said they were like three gunshots and he was run over and they said they said he took his own car run him over his own car and left with it and he had like a gunshot wound."

Houston police say Kaewprasit was shot during a carjacking and died at the hospital.

Neighbors looked out of their windows as the shooter drove off with the victim's car.

Witness Mario Chupina said, "I heard some discussion outside and I suddenly heard four fire shots and then I saw a car flying through the left here."

Houston police say that car is now key to finding who did this. Police say the suspect is driving a black 2015 Nissan Altima four-door vehicle. The license plate number GSK-5233. Anyone with information on this case is urged to contact the HPD Homicide Division at 713-308-3600 or Crime Stoppers at 713-222-TIPS.

Those who live at the complex say this kind of violence is something that never happens.

Resident Iyanna Williams said,"We're shocked, we're just shocked and sad that this would happen, so close to the holidays, we don't, we didn't expect anything like this to happen."

Man shot and killed in carjacking