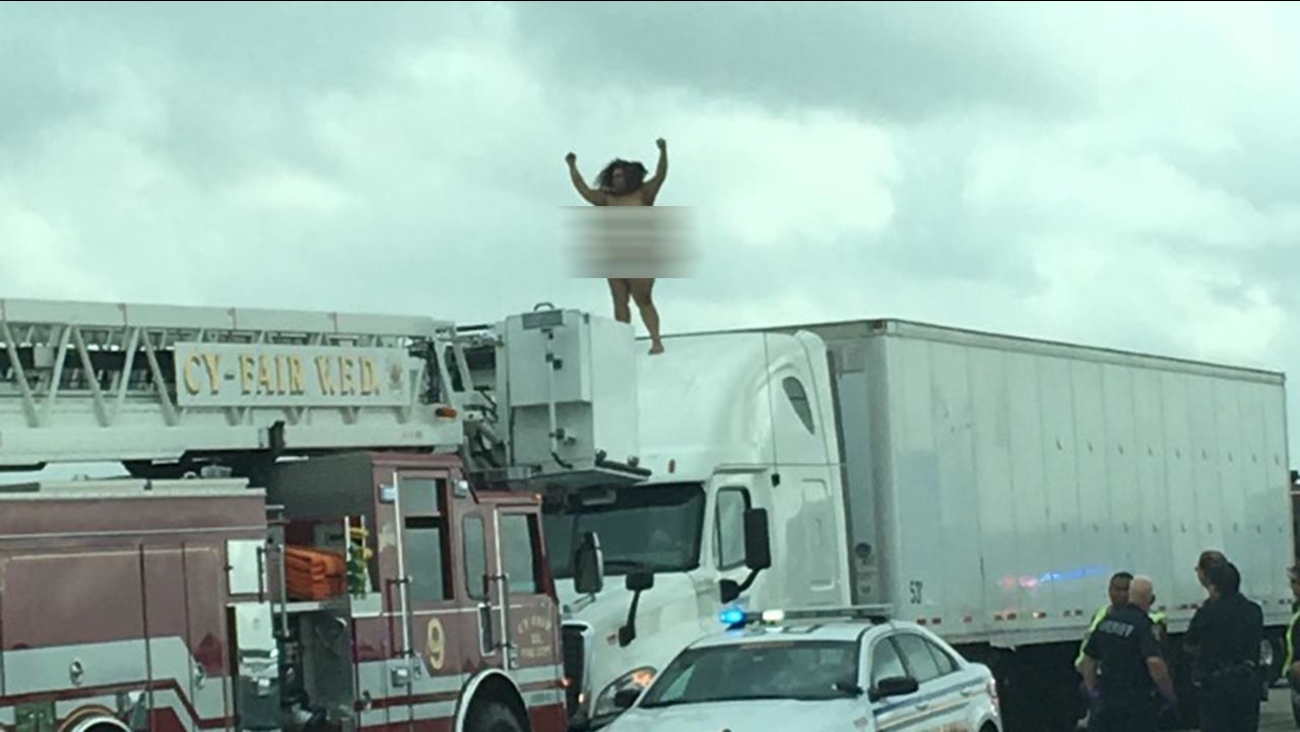 Years from now when our children or grandchildren ask about this monumental year, it'll be hard to explain. People lived in fear of clowns, chased imaginary monsters and the highways of Houston were halted by a number of naked pedestrians.

Here are the highlights of strangeness that made up this twilight zone-esque year.

As if Houston traffic wasn't difficult enough, this year drivers had to deal with a new obstacle: naked pedestrians.

After a wreck, a woman stripped down and got on top of the cab of a big rig.
EMBED More News Videos

That woman refused to come down for about two hours.

The woman, clearly agitated, stood up a few times, but then returned to sitting on the cab of the 18-wheeler. She even did a few dance moves.


Numerous motorists reported seeing the unidentified naked man jogging down the shoulder of I-610 westbound near the I-45 interchange.
EMBED More News Videos

A group of friends was heading to the Texans game and, when they spotted the man, they grabbed their phones to start recording.

While hundreds of traffic incidents happen in Texas everyday, none were quite like this.


It's not as terrifying as snakes on a plane, but a mouse in car caused a woman to crash into Corpus Christi Bay.
EMBED More News Videos

It's not as terrifying as snakes on a plane, but a mouse in car caused a woman to crash into Corpus Christi Bay.

Fortunately the woman wasn't injured, but officers say she was embarrassed about the whole incident.

If you think a mouse in your car is scary, then you probably didn't enjoy clowns this year.

A Houston teen was arrested for making a clown-related threat against a Houston school.
EMBED More News Videos

Clown-related threats against schools swept the nation, after the string a creepy incidents.


A naked man was singing and dancing at Parker Road and Northline, just blocks away from the North Freeway. The man was in his 'birthday' suit, with his pants down at his ankles.
EMBED More News Videos

Perhaps the most surprising part of the video was a Houston police officer passing right by the naked man, but not stopping. One witness tells us police eventually came and the man was taken away in an ambulance.

The nudity wasn't limited to the roadways.


It was quite a scene at Hermann Park as a naked man went for a swim at McGovern Lake.
EMBED More News Videos

This man at least remembered to wear pants as he jumped into the Brazos River to avoid police after a high speed chase. However, he didn't think far enough ahead to figure out how to get out of the river.
EMBED More News Videos

Man arrested after wild police chase that ended in the Brazos River.

Police were able to get the suspect out of Brazos River, but he crawled back in and had to be rescued/apprehended a second time.


Have no fear, Houston! We now have our own local superhero!

A man dressed as a Marvel Comics character has been spotted riding around town recently.

Evo Deadpool Gambino even legally changed his name after the fictional comic book anti-hero was made into a smash hit movie earlier this year.


Houston wasn't the only place having a weird 2016, it seems to be a wide-spread phenomenon.

Indiana State Police said a semi pulling a flatbed trailer crashed through the Living Hope Church in Delaware County after the driver choked on a cough drop.

Luckily, no one was in the church at the time and the driver was taken to a local hospital for treatment.

The roads weren't the only place to find dangerous accidents.


An exploding toilet might sound like a gross joke, but it's a serious matter to one woman in Florida who says a toilet literally blew out in an elementary school bathroom.
EMBED More News Videos

A Florida librarian is suing the city after shrapnel from an exploding toilet left a deep gash in her leg, eventually leading to a tuberculosis infection.

Following the incident, Burson's leg wound didn't heal properly, and eventually became severely infected. Thankfully, she did not end up losing her limb; she was put on powerful antibiotics for six months.


If you've ever been to a hibachi restaurant, chances are you've seen the toy in question: It looks like a boy who drops his pants and squirts water.
EMBED More News Videos

When officers arrived at the restaurant, they noted the toy wasn't anatomically correct. The officer wrote, "I observed the toy to have no penis and just a hole for the water to shoot out."

Who could forget the game that swept the nation...for about a month.

As players left their homes to capture imaginary monsters, they ran into some real dangers. People were shot, stabbed, robbed, hit by cars and ended up in some strange places.
EMBED More News Videos

There are more installs of Pokemon Go on Android than Tinder, and players use the app more than WhatsApp, Instagram, Snapchat and Facebook Messenger. So what's the big deal?