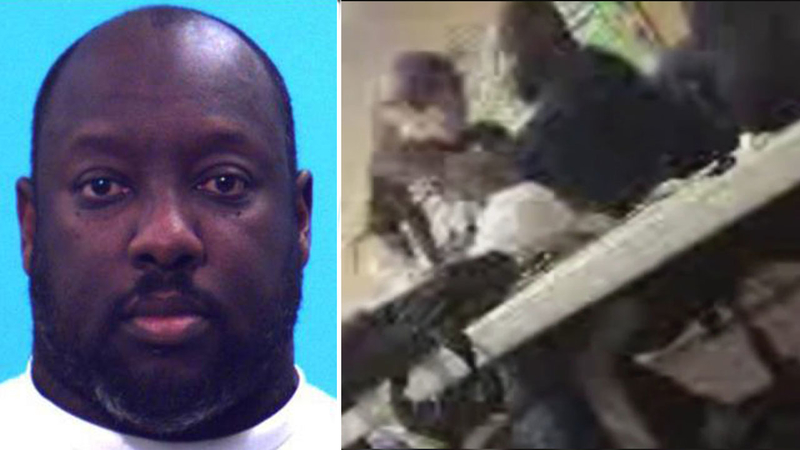 MANVEL, TX (KTRK) -- A teacher's aide has been arrested, accused of injuring a non-verbal autistic student at the Shiloh Treatment Center in Manvel.

Cell phone video believed to have been taken inside the classroom shows the aide appearring to slap a 13-year-old named Nicco.

Byron Ramon Criddle, 46, has been charged with injury to a child.

"You have to pick on a little child who is defenseless and can't speak and defend themselves, who can't speak and tell someone," said Nicco's mother, Habebah Gaber. "You're pretty low."

Gaber turned to Eyewitness News after she says another special needs student gave her the cell phone video.

"She told me that it happens all the time. He is constantly hitting my son," Gaber said. "That she witnessed him with keys between his knuckles, punching my son in the head, punching him in the stomach, kicking him, pinching him."

Criddle has been fired from the Shiloh Treatment Center, where he has been working with special needs children for 13 years. Investigators believe there could be more victims, unable to speak out.

"My son is just love. It doesn't matter who hurt him, my son is still going to love them," Gaver said. "That's all he can express is love."

"I do not have enough information to address any specific alleged infraction. Like any school district, Shiloh Nonpublic has a very strong compliance department. Shiloh Nonpublic management are keenly interested in staff treating youth properly and it expeditiously implements precautionary security measures that include removing staff when necessary. All reports of incidents and allegations are made to the proper state and federal agency. The website listings cover a two year period and shows Shiloh compliant with 7,526 standards through the course of 64 inspection visits. There are 21 deficiencies cited (including the 3 in review). Most of the deficiencies are administrative. They are incidents and not systematic, and are all dealt with expeditiously as the dates of completion show. Shiloh's agency partners, stakeholders and accrediting bodies have expressed no concerns about Shiloh's programming or track record. Shiloh is audited and reviewed regularly by federal, state and accrediting personnel and none have noted a problem with Shiloh's systems. Each and every incident involving a Shiloh staff person is dealt with quickly and according to standards."

Related topics:
manvelassault
Copyright © 2021 KTRK-TV. All Rights Reserved.
TOP STORIES
Federal investigators at site of MD-87 plane crash in Waller Co.
Big warm up ahead but another cool front in the forecast
Reminder, Astros fans! Today's Game 5 is an afternoon affair
US expected to authorize Moderna, J&J boosters as soon as today
Free college proposal likely to be dropped from Biden's spending plan
White House details plan to roll out COVID vaccines for younger kids
Body found in fire's rubble had gunshot wound, HFD says
Show More
5K run to be held in murdered woman's honor
How residents in this Harris County neighborhood became numb to crime
Nikolas Cruz pleaded guilty to murder in 2018 Parkland massacre
Houston executive 1 of 21 on board jet when it crashed in field
Americans arrested for trying to board flight in Switzerland
More TOP STORIES News