Protest and prayer fill air outside Greater Church of Lucifer 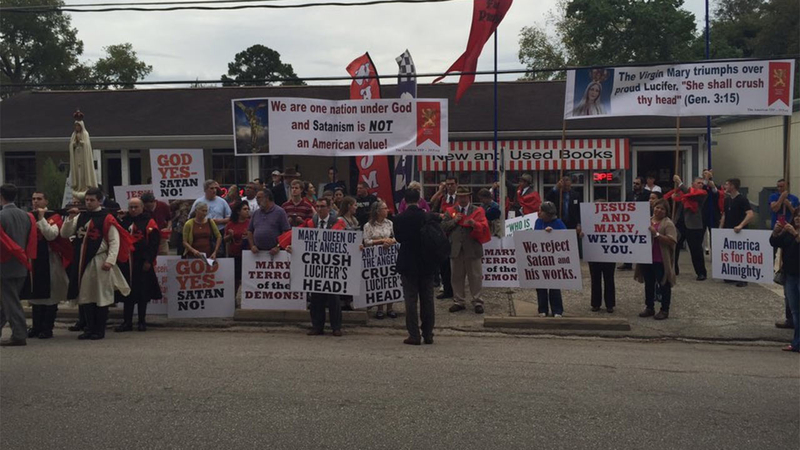 Protest outside the Greater Church of Lucifer

"This is what we get when we have Freedom of Religion," said protester Christine Weick.

This was the group's first meeting at its first building, which is smack dab in the middle of Old Town Spring.

"We have gatherings. But they're not services," says Co-President Michael W. Ford. "We don't preach. We don't have something that we try to tell people this is reality."

Contrary to popular belief, Ford says they don't sacrifice animals or worship the devil, and they're not here to convert anyone.

"They just believe that that's what happens. That's what they spew."

Some protesters made their way onto the property, only to be escorted off by Harris County Sheriff's Deputies.

The group Tradition Family Property performed a Rosary and prayed for the nation and the community.

Some came from out of town to protest. Christine Weick, known for protesting outside the Supreme Court during same-sex marriage arguments, is one of them.

"We are all Christians here, together against this," she said. "We ought to be filling up the whole street here that they have to pass through us to get into that church."

Some people sat on porches and took in the sights and sounds. Some, including Janet Lynchard, stood shaking their head.

"They need God, is what they need. But they're not going to find Him in this manner."

Lynchard's daughter owns a nearby business. She says the protesters are sending the wrong message.

"If I were not a Christian and I saw the way some of the people are behaving here, I would not want to be a Christian because I believe God wants us to love these people because He loves them," she told us.

But Christine Weick says God's love is exactly what she's showing while she's here: "I love you enough to say you either bow now or you will be forced to bow later and it's too late."

These Luciferians say they just want to go about their business.

"They have the right to do what they do. And that's cool with us. But we have a right to believe in what we do too. And we need to co-exist," Ford says.

The group expects about 40 Luciferians for its opening weekend.