Prosecutor: Cosby has shown a 'lifetime of sexual assault' 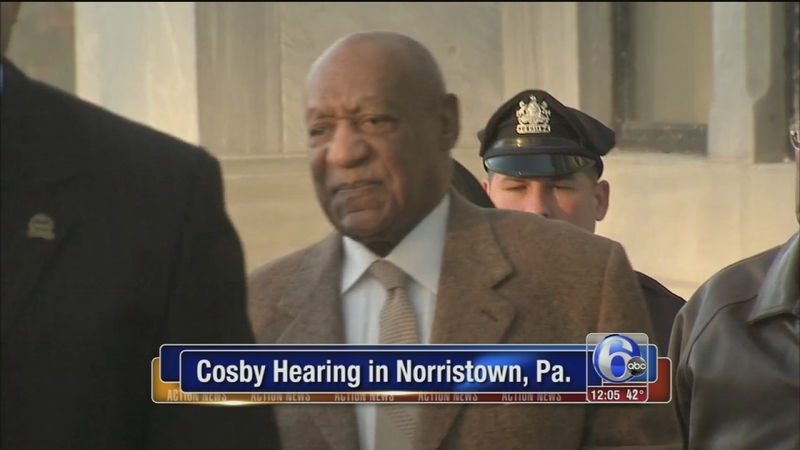 Prosecutor: Cosby has shown a 'lifetime of sexual assault'

NORRISTOWN, PA -- More than a dozen women who accuse Bill Cosby of sexual assault should be allowed to testify at his upcoming trial because their stories are so similar they show the "handiwork of the same perpetrator," a prosecutor argued Wednesday.

Returning to court for the second day of a key pretrial hearing, Montgomery County District Attorney Kevin Steele said the 79-year-old Cosby befriended women who saw him as a mentor, knocked them out with pills and drinks and sexually assaulted them.

Steele wants a judge to let 13 of the women take the witness stand at Cosby's trial next year on charges he sexually assaulted a woman in 2004 at his home outside Philadelphia.

"This is a lifetime of sexual assault on young women," Steele told Judge Steven O'Neill.

The defense, which is scheduled to put on its case later Wednesday, says the accusers' decades-old memories are hazy and unreliable and should not be aired in court. But Steele told the judge that Cosby shouldn't be rewarded for his ability to incapacitate his victims "and putting them in a state where they can't resist."

Steele argued that it's not the judge's job to weigh the accusers' credibility, but only to determine if their accounts are similar enough to accuser Andrea Constand's to be deemed part of a "signature" crime pattern. The jurors can then decide if their testimony is credible, he said.

"We ask the court to look at the remarkable similarities" in the assaults, Steele said. "That is an essential element to all of this. You have a situation in each case where it's a young woman. He is significantly older. He is married at the time. All but one of the women met the defendant through her employment. He acted as a mentor."

The case began a decade ago when Constand, a Temple University employee, filed a police complaint against Cosby, her friend and mentor, over an encounter at his home. A prosecutor at the time declined to file charges.

Authorities reopened the case last year after scores of women raised similar accusations and after Cosby's damaging deposition testimony from Constand's lawsuit became public. The trial judge last week said the deposition was fair game at trial, arming prosecutors with Cosby's testimony about his affairs with young women, his use of quaaludes as a seduction tool and his version of the sexual encounter with Constand.

The judge must walk a fine line in weighing the accusers' testimony, given a 2015 state Supreme Court ruling that threw out a Roman Catholic Church official's child-endangerment conviction because the Philadelphia trial judge let too many priest abuse victims testify about the alleged church cover-up.

The defense has questioned the women's motivation, noting many are clients of celebrity lawyer Gloria Allred, who has suggested Cosby should put up a $100 million settlement fund for potential sexual assault and defamation claims.

Allred argues that her clients have a duty to testify if the court wants to hear from them. She called the defense's dismissal of their accounts "out of context or just plain wrong."

Cosby was known as America's Dad for his top-rated family sitcom, "The Cosby Show," which ran from 1984 to 1992. He has been married to his wife, Camille, for more than 50 years, and they have five children.

The Associated Press doesn't typically identify people who say they are victims of sexual assault unless they have come forward publicly, as Constand has done.
Related topics:
pennsylvaniaentertainmentcourt casebill cosby
Copyright © 2021 by The Associated Press. All Rights Reserved.
More Videos
From CNN Newsource affiliates
TOP STORIES