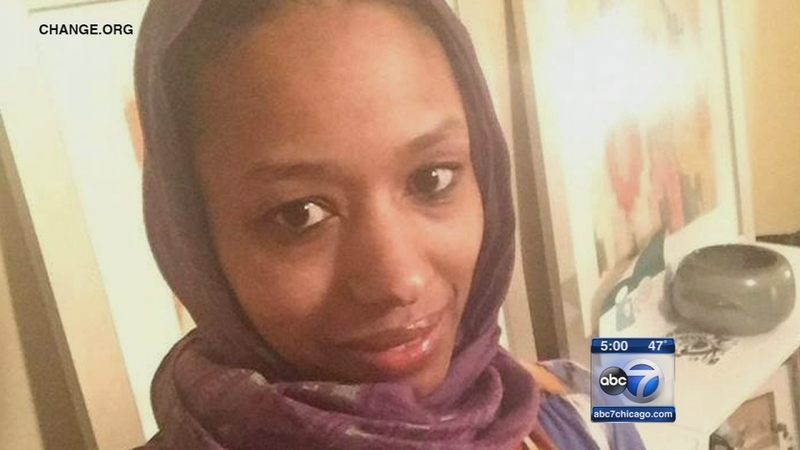 WHEATON, IL -- Dr. Larycia Hawkins, a professor at Wheaton College, has been suspended because of a Facebook post she wrote about Christians and Muslims.

Standing with a variety of Christian ministers, Dr. Hawkins held a press conference Wednesday defending her online statement. She said it's about a show of solidarity with Muslims, and to prove that, Dr. Hawkins is wearing a hijab until Christmas. However, that is not what got her into trouble at Wheaton College. Instead, it was a statement about one God that led to her suspension.

"This Advent I'm standing with my Muslim neighbors out of my love for Jesus and the love I believe he has for all of the world," Dr. Hawkins said.

Between a sit-in and an online petition, Dr. Hawkins is getting a lot of support from students on campus. First they prayed, then they protested, shouting: "Reinstate Doc Hawk, Doc Hawk."

Wheaton College students are demanding answers from their college president on why he made the decision to suspend the school's only black female tenured professor.

"We love and support Dr. Hawkins and see her as an essential part of our community," said Wyatt Harms, a Wheaton College student.

In a show of support for Muslims, Dr. Hawkins was placed on leave after posting a statement on her Facebook page. She wrote, in part, "I stand in religious solidarity with Muslims because they like me, a Christian, are people of the same book, and as Pope Francis stated last week, we worship the same God."

According to a statement on the Wheaton College website, Dr. Hawkins did not "faithfully represent the College's evangelical Statement of Faith." The statement says Christians worship their own God.

"It's not about theology, it's about the act of love and act of kindness and treating people as different faiths as humans before we treat them as issues," said Matthew Adams, a Wheaton College student.

"I think Wheaton professors should be able to speak on Facebook without fear of retribution," Harms said.

But not all Wheaton College students agree While Dr. Hawkins is a popular and very well-liked professor, some support the decision to suspend her.

Dr. Hawkins said she does not believe she violated that statement of faith. She is suspended for the entire second semester.