Police: Semi driver was very drunk when weaving in and out of traffic 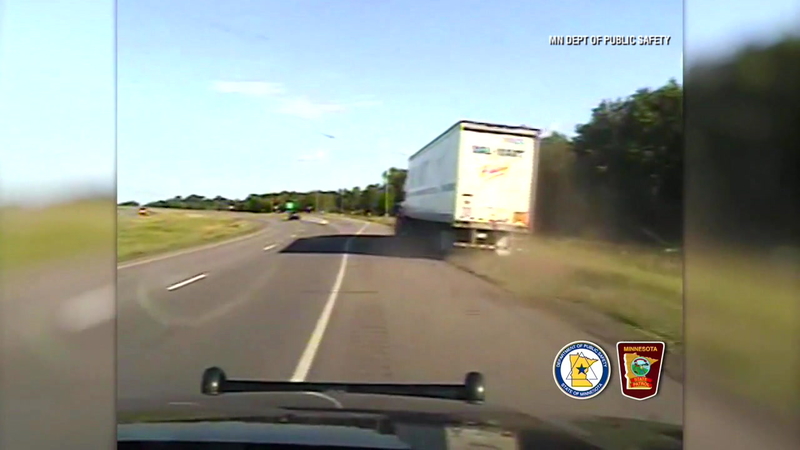 Police: Semi driver was very drunk when weaving in and out of traffic

Dashcam video shows a terrifying moment when a semi-truck in Minnesota was seen swerving in and out of traffic.

Police say the driver tested at more than three times the legal limit for alcohol.

Images from the dashcam of a Minnesota state trooper show the officer holding up bottles of alcohol from the cab of the truck, according to police.

In the video, you can see the semi swerving off the right shoulder, hitting a sign, then struggling to get back on the road.

The driver was barely able to walk, shutting down the highway for part of the time because the driver was crawling on the freeway.

Police arrested the driver, Johnathan Czech, 48. He was working for a third-party carrier at the time, Crete Carrier. Walmart issued a statement saying it took the matter seriously, while Crete said it fired Czech when it learned of the arrest.
Related topics:
drunk drivingdashcam video
Copyright © 2022 ABC, Inc.
TOP STORIES
We have a cold and damp night ahead
High school student attacked in his family's driveway in Richmond
Winter blast felt across Texas
Man killed in incident authorities believe stemmed from road rage
Major crash blocks southbound lanes of I-45 in The Woodlands
Alvin votes no on 'sanctuary city for the unborn' ordinance
Opening of adult store in Missouri City on hold after zoning issues
Show More
TxDOT crews prepared as temperatures continue to drop
Burglar caught on camera hitting luxury apartment building
Digging into the process of rebranding Sugar Land Skeeters
Adele postpones Vegas residency due to COVID among crew
Man killed during attempted robbery of woman he met online, HPD says
More TOP STORIES News