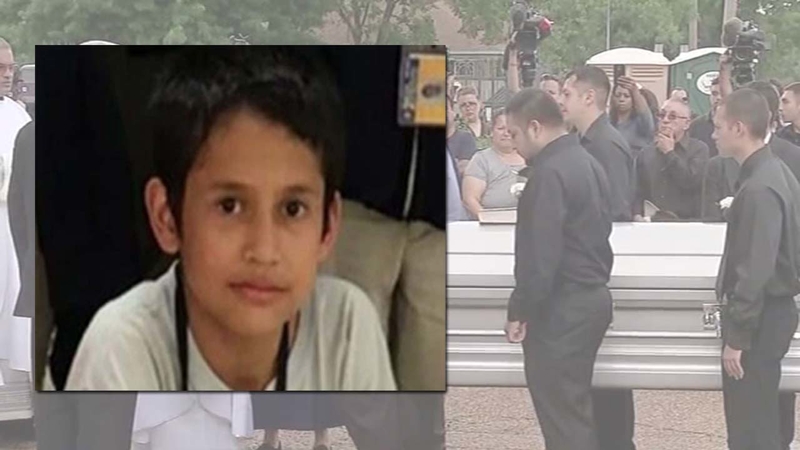 Friends brought in an arch of blue and white balloons and wore t-shirts of the same colors with Josue's name. Huge arrangements of white roses and carnations were loaded into the hearse followed by the casket.

The procession to the church began around 10:30am. Police officers on motorcycles led the way, followed by the hearse and about a dozen black SUVs and limos with Josue's family.

Before leaving for the Mass, Josue's older brother, Juan Flores, spoke to abc13.

"I think today is when it's finally going to feel real. I wake up believing it's just a horrible dream, that I'll wake up and be able to see my brother again, talk to him about this. But when the burial is over it's something I have to accept. That it's reality," Juan said.

He says the community's support has meant a great deal to his family, and at this time, they're rallying around the one for whom the loss is the greatest.

"My mom, she's the one I believe has been hit the hardest," said Flores. "My brother was always there with her, that was her little boy."

The 11-year-old was brutally stabbed as he walked home from Marshall Middle School. His killer remains on the loose.

Not far away where the neighborhood gathered to say goodbye to Josue, hearts are heavy, for the loss of Josue, and their own sense of security.

Erika Diaz attended funeral and says she has children that see can't let out of her sight.

"We can't let our kids walk the streets," she added. " You can't say what's going to happen."

The funeral was held at Holy Name Catholic Church at 1917 Cochran. The burial followed at Historic Hollywood Cemetery on 3506 N. Main.