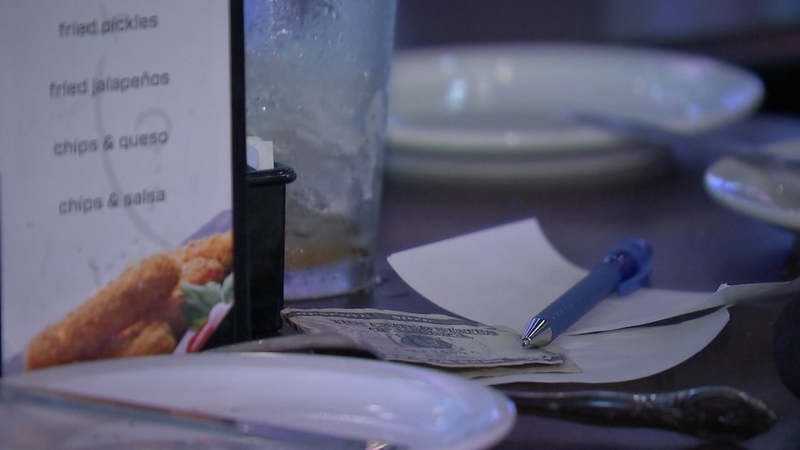 PEARLAND, TX (KTRK) -- For the lunch crowd at Stadia Sports Grill in Pearland, tipping is just part of the bill.

What do customers like Lee Gee base it on?

"Both on how they took care of me or how big the bill is," said Gee.

Dreka Cox adds, "I'm really big on customer service and I do base my tips on how good my service was. It's very, very important to me."

Jacqueline Mathis has been a waitress for eight years. The server says while there are good days and bad days, she relies on tips.

She says she wouldn't want to give up her tips even for a higher hourly wages.

"To me doing it that way is just a green light to get bad service going somewhere because the employees have no incentive to work," Mathis said.

Houston-based Joe's Crab Shack has raised its starting wage for servers to $14 an hour in 10 states outside of Texas, citing the $2.13 an hour sub-minimum wage for tipped workers is antiquated in such a competitive market for servers.

Melissa Stewart with the Greater Houston Restaurant Association says it's a movement that's taking off in placed like New York and a hot topic industry wide.

It's a concept that not all owners and managers are ready to put on their menus.

Stadia Sports Grill Manager Jason Sampson said, "I think we should put the tip policy in the customers' hands. People come out for good service."

The no-tipping concept is an idea even customers say would be an adjustment.

Tapatha McClendon-Richard said, "I think tipping is very important when it comes to service. This is what people do for a living and they depend on us to help them out."