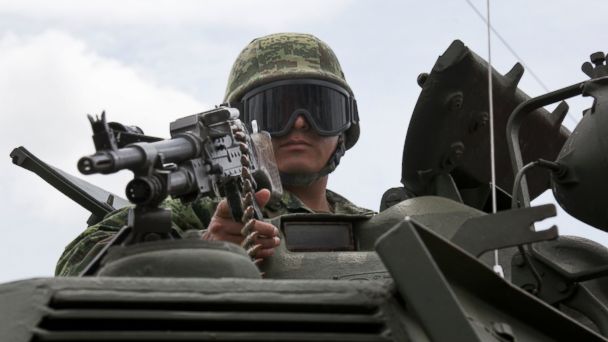 A massive manhunt was under way today for Mexican drug lord Joaquin "El Chapo" Guzman, who, the country's top security official said escaped from a maximum security prison using a 1-mile tunnel connected to the shower area of his cell.

The leader of the Sinaloa cartel escaped from the Altiplano prison, 55 miles west of Mexico City, shortly before 9 p.m. Saturday, said Monte Alejandro Rubido, the head of Mexico's National Security Commission. He had been arrested in February 2014 after more than 10 years on the run.

When guards noticed Guzman could no longer be seen on the prison's surveillance system, they checked his cell and found an opening in the shower area, Rubido said. The opening led to a tunnel made of PVC pipe that had an adapted motorcycle engine likely used to transport the tools needed to drill the tunnel.

Authorities immediately began searching the surrounding area and flights were suspended at the nearby Toluca airport. Rubido said 18 prison officials were transferred to Mexico City for questioning.

Attorney General Loretta Lynch said in a statement that the "U.S. government stands ready to work with our Mexican partners to provide any assistance that may help support his swift recapture."

Guzman was captured last year in the beach resort town of Mazatlan, Mexico, after escaping prison in 2011. It's unclear exactly how he had escaped, but he did receive help from prison guards who were prosecuted and convicted.

Guzman has been a long-wanted figure by the Drug Enforcement Agency and the U.S. Treasury once described him as "the most powerful drug trafficker in the world."

The Sinaloa cartel allegedly uses elaborate tunnels for drug trafficking and has been estimated to be responsible for 25 percent of all illegal drugs that enter the U.S. through Mexico.

Guzman has also long been ranked among the richest men in the world by Forbes. Drug enforcement experts have conservatively estimated the cartel's revenues at more than $3 billion annually.