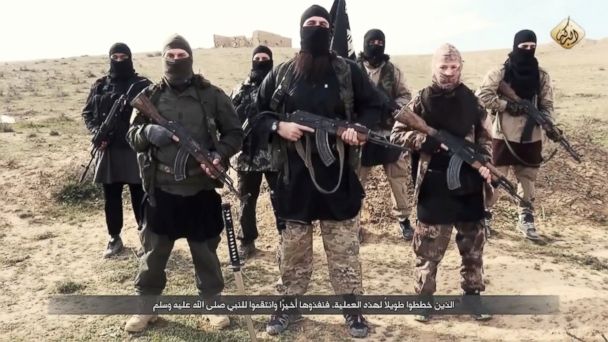 Federal authorities have arrested two women who were allegedly planning to detonate a bomb somewhere in the United States after being radicalized at least in part by ISIS, sources familiar with the arrests told ABC News.

The public was never in danger, as it was all part of a lengthy undercover FBI operation. And court documents suggest any plotting was more aspirational than operational.

However, court documents cite direct connections to known or suspected terrorists inside the United States and overseas.

Both were arrested earlier today without incident in Queens, N.Y., where they had been roommates until recently.

In meetings with an undercover FBI agent in recent months, Velentzas and Siddiqui allegedly discussed efforts to learn the "science" involved in building explosives, often analyzing previous bomb plots inside the U.S. -- failed ones and successful ones, like the Oklahoma City bombing. In addition, they downloaded "The Anarchist Cookbook" and watched videos about building bombs, court documents allege.

Also in meetings with the undercover FBI agent, Velentzas expressed anger over U.S. airstrikes targeting ISIS in Syria and Iraq, and she suggested she and Siddiqui be referred to as "citizens of the Islamic State," according to charging documents. She also allegedly watched ISIS propaganda videos with the undercover agent.

Two weeks ago, after news broke about Pugh's arrest, she said she didn't understand why people wanted to join ISIS overseas when there are ways of "pleasing Allah" here in the United States, court documents say.

She allegedly said she was looking "to make history," and in late December she and the FBI agent discussed possible targets for a bombing.

"We are living ... the last war, the big war before the end of day starts, in English they call it Armageddon, we are actually living in that time, it's not a joke, it starts in Syria," she allegedly told the undercover agent.

Meanwhile, unbeknownst to Velentzas or the undercover agent, Siddiqui had acquired what she later described as "everything," including four propane tanks. She also downloaded instructions on how to those tanks in building a bomb, according to court documents.

In fact, authorities say nine years earlier, Siddiqui "became close with Samir Khan," the American who joined AQAP and then became editor of Inspire magazine, the terrorist group's online propaganda magazine. Khan published the article "Make a Bomb in the Kitchen of Your Mom," which has since played a prominent role in so many terror plots, including the Boston bombing.

It's unclear exactly why the two were arrested this morning. But court documents say Siddiqui "recently" suggested they each work on their own plans for jihad. And in November, Velentzas became suspicious that they may be working with an undercover agent. She then conducted research online, trying to determine whether the person they were dealing with was actually any FBI agent, court documents say.

Such arrests tied to ISIS have become a regular occurrence recently.

Last week, two cousins were arrested in Chicago -- one of them a current member of the Illinois National Guard -- for allegedly trying to launch attacks in the U.S. and overseas on behalf of ISIS. They were also nabbed in an FBI undercover operation, and both men had been under FBI surveillance for months, federal authorities said.

The week before, the indictment against New Jersey native Pugh, 47, was announced. He had been living overseas for years but was secretly arrested three months ago after being deported back to the United States. On his laptop, FBI agents allegedly discovered more than 180 jihadist propaganda videos and noticed he had been conducting online searches for such phrases as "borders controlled by Islamic state," "kobani border crossing," and "who controls kobani."

Two months ago, three New York City men were arrested on charges they allegedly conspired to join ISIS but also expressed willingness to carry out attacks on the terror group's behalf in the United States. The men had planned to travel to the Middle East and had also pledged to launch attacks in this country, including one on President Obama or planting a bomb in Coney Island, Brooklyn, federal officials said.

Over the past 18 months, more than 30 people have been charged with joining terrorist groups in Syria and Iraq or trying to do so.