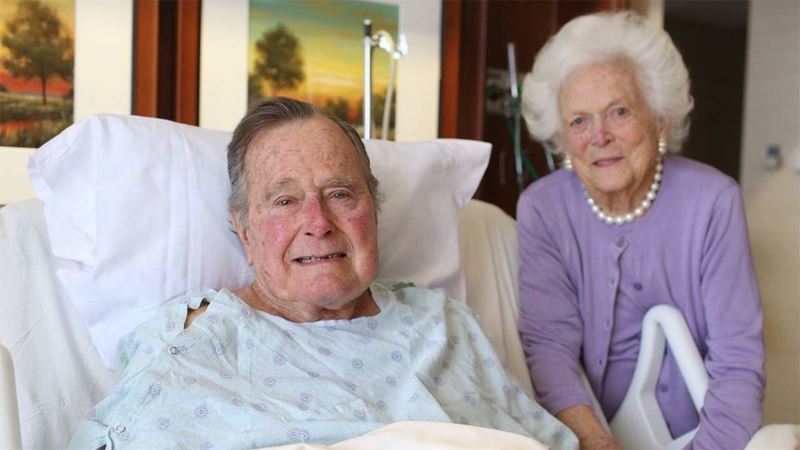 A photo from family spokesperson Jim McGrath showed Barbara next to George H.W. in a hospital bed.

President and Mrs @GeorgeHWBush thank their fellow Americans and friends from around the world for their prayers and good wishes. pic.twitter.com/PhpXXGKl6p

The 92-year-old former president was struggling to breathe when he was admitted to the Houston Methodist Hospital Jan. 14, and had since been treated for pneumonia in the intensive care unit. Ninety-one-year-old Barbara Bush was suffering from bronchitis and entered the same hospital Wednesday.

Two doctors who have been treating the Bushes, Dr. Amy Mynderse and Dr. Clint Doerr, talked about the Bushes medical treatment during a news conference at the hospital.

Doctors at Methodist Hospital update the media on the former Presdient Bush and his wife, Barbara

Mynderse said the former president had been sitting up and watching television, describing him as "not your average 92-year-old."

She said Mrs. Bush has been discharged and that "she is back to her normal self."

Bush family spokesman Jim McGrath said Sunday that the former president's vital signs were normal and that doctors hoped he could be moved out of intensive care in the next day or so.

At one point during the former president's stay, doctors inserted a breathing tube and a ventilator was employed to assist his breathing. The tube was removed Friday.

McGrath said Mrs. Bush was given the option of leaving the hospital Sunday, but that she opted to stay overnight to continue her recovery and be close to her husband.

The Bushes thanked "their well-wishers for their kindness, and especially their prayers," McGrath said.

The couple's 72-year marriage is the longest of any presidential couple in American history.

The Bushes were married Jan. 6, 1945. At the time of their wedding, he was a young naval aviator. She had been a student at Smith College.

After World War II, they moved to the Texas oil patch to seek their fortune and raise a family. It was there that George Bush began his political career, representing Houston for two terms in Congress in the late 1960s and early 1970s.