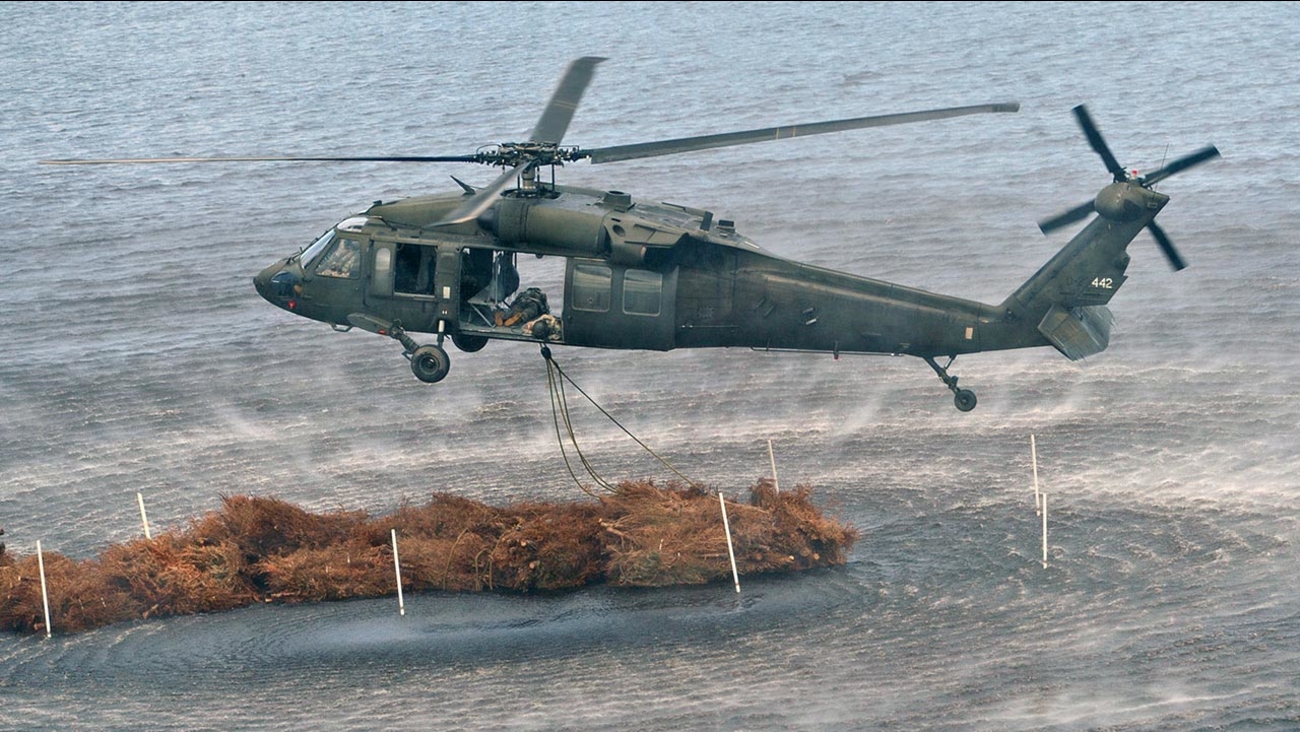 AP
NAVARRE, FL -- The Louisiana National Guard says the bodies of two soldiers have been recovered from a helicopter wreck off the Florida coast.

A news release from the Guard on Thursday says the bodies of two others are believed to still be inside the wreckage.

The release says officials cannot confirm the other two soldiers are inside until a salvage crew is able to recover the aircraft.

Divers found the Black Hawk helicopter that crashed amid dense fog during a Florida training mission, killing 11 Marines and soldiers. But continuing bad weather Thursday prevented the recovery of the flight recorder from wreckage 25 feet deep.

The Guard soldiers were based in Hammond, Louisiana. They have not yet been identified.

THIS IS A BREAKING NEWS UPDATE. Check back soon for further information. AP's earlier story is below.

Divers found the Black Hawk helicopter that crashed amid dense fog during a Florida training mission, killing 11 Marines and soldiers, but continuing bad weather Thursday prevented the recovery of the flight recorder from wreckage 25 feet deep.

There's almost no visibility at the crash site, forcing search crews to move slowly in rough surf to avoid running into each other or wreckage, he said.

One of the Marines killed was Kerry Kemp, who was based at Camp Lejeune in North Carolina, said his sister-in-law, Lora Waraksa of Port Washington, Wisconsin. She said her sister, Jenna Kemp, was notified overnight that her husband's remains had been found. Kemp was a "proud Marine, a loving husband and most wonderful father," with a child about 1 year old, she said.

Another victim was Marcus Bawol, 27, from Warren, Michigan, north of Detroit. His sister, Brandy Peek, said military officials told the family they had identified his remains. Bawol "loved everything about the military," Peek said.

The military is not yet releasing any details about those killed, nor has it described the cause of the crash, which happened Tuesday night in weather conditions so bad that another helicopter turned back.

The same fog and crashing Gulf waves surrounded a pier where a large gathering held vigil Wednesday night, creating a somber backdrop to the songs, tears and prayers of people with strong ties to the military and the sprawling Eglin Air Force Base.

Dozens of airmen walked the shores of Santa Rosa Sound on Thursday, and the Coast Guard searched for debris in the water, said Mike Spaits, a base spokesman. Pieces of clothing and bits of the UH-60 Black Hawk helicopter have washed ashore, and homeowners have contacted the military to pick it up, he said.

"My heart is really hurt right now knowing these people were here just on training - knowing they went and left their family members and did not give that goodbye, you know, because they weren't going off to war," a tearful Dolly Edwards, herself the wife of a Marine, said at the vigil.

The helicopter that crashed had a veteran crew from Hammond, Louisiana, that served multiple tours in Iraq and helped humanitarian missions after Gulf Coast hurricanes and the BP oil spill.

They were carrying "unconventional warriors" from the Marines Special Operations Command. Like the Army's Green Berets and the Navy's SEALs, they were highly trained to endure grueling conditions and sensitive assignments on land and at sea, from seizing ships to special reconnaissance missions and direct action inside hostile territory.

The helicopter crashed in a strip of water between the mainland of the Florida Panhandle and a long barrier island facing the Gulf. Military officials said search crews were focused on a 6-mile stretch of the sound.

"It sounded like something metal either being hit or falling over, that's what it sounded like. And there were two booms afterward, similar to what you hear with ordnance booms, but more muffled," Urr said.

Human remains were found Wednesday, and debris was seen floating in the sound.

"We saw gloves, a uniform with a last name on it," said Alan Collinsworth, a hotel desk clerk. Lots of debris was floating past the hotel's waterfront. "We were very shocked."