5-year-old will melt your heart with teddy bear drive 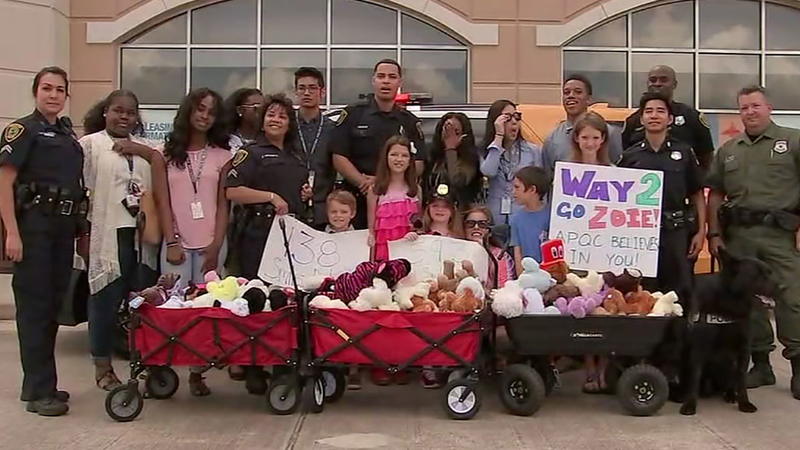 HOUSTON, Texas (KTRK) -- It's one hot July day but outside a northwest Houston police station, it's 5-year-old Zoie Kennedy who will melt your heart.

"Wherever I go I like to give children bears," said Zoie.

"I'm blessed. God gave her that nature and I can't really explain where it comes from," said her mother, Nickie.

It started with her sick friend Ava who is battling something that's difficult for a child to say -- juvenile arthritis. It's even more difficult for her to understand how her friend can't walk.

From there, Zoie's bear drive began. Hundreds of people have donated from all over. Zoie showed us the wagons of animals she was about to wheel up to the police substation. Every stuffed toy is shaped differently and every shape comes with a story.

The 138 bears dropped Friday at the substation will be distributed through their Badges and Bears program to kids in the hospital and traumatized children they meet on patrol.

"I feel like you're never too old for stuffed animals but it really puts a big smile on their face. When the kids come out from the hospital and see those bears," said Houston Police Department officer Jeremy Lahar.

This is the third drop-off for Zoie since her mission began. Bears she collected will also be given through the Cy-Fair Fire Department and Texas Children's Hospital. On Friday the officers who will distribute the bears let her push a few buttons in the police car, giving her another reason to smile.
Zoie's mom says what started as a mission to make sick kids happy has been contagious.

Zoie's smile led to her parents' smiles and the bear donors' smiles. And hopefully by now, you're smiling too.

Nickie Kennedy says she's not sure what's next. They might do the bear drive again next year, but whatever Zoie plans, she'll be right behind her.