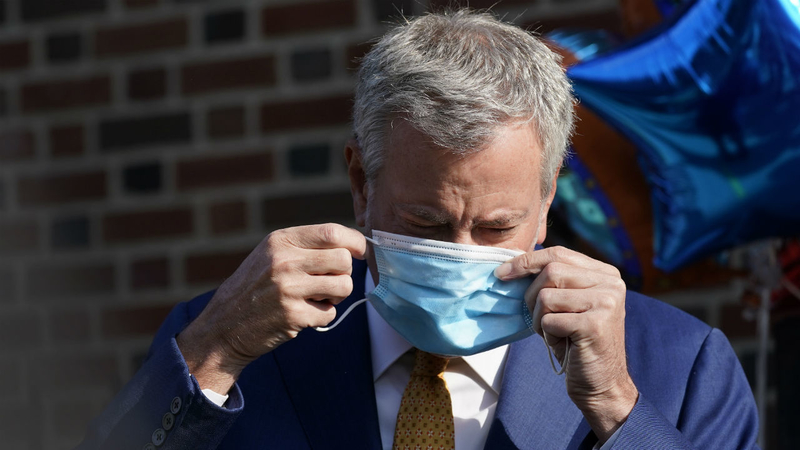 NEW YORK -- New York City's mayor said Sunday that he has asked the state for permission to close schools and reinstate restrictions on nonessential businesses in several neighborhoods because of a resurgence of the coronavirus.

The action, if approved, would mark a disheartening retreat for a city that enjoyed a summer with less spread of the virus than most other parts of the country, and had only recently celebrated the return of students citywide to in-person learning in classrooms.

About 100 public schools and 200 private schools would have to close. Indoor dining, which just resumed a few days ago, would be suspended. Gyms would also close.

The mayor, a Democrat, said he was taking the action in an attempt to stop the virus from spreading deeper into the city and becoming a "second wave," like the one that killed more than 24,000 New Yorkers in the spring.

"We've learned over and over from this disease that it is important to act aggressively, and when the data tells us it's time for even the toughest and most rigorous actions we follow the data, we follow the science," de Blasio said.

Over the past two weeks, the number of new cases of the virus has been rising in pockets of the city, predominantly in neighborhoods in Brooklyn and Queens that are home to the city's large Orthodox Jewish population.

Nearly 1,100 people have tested positive in Brooklyn in just the last four days, according to state figures.

De Blasio made the announcement shortly after Gov. Andrew Cuomo complained that local governments with coronavirus hot spots had "not done an effective job" of enforcing social distancing rules.

"If a local jurisdiction cannot or will not perform effective enforcement of violating entities, notify the state and we will close all business activity in the hot spots where the local governments cannot do compliance," Cuomo said.