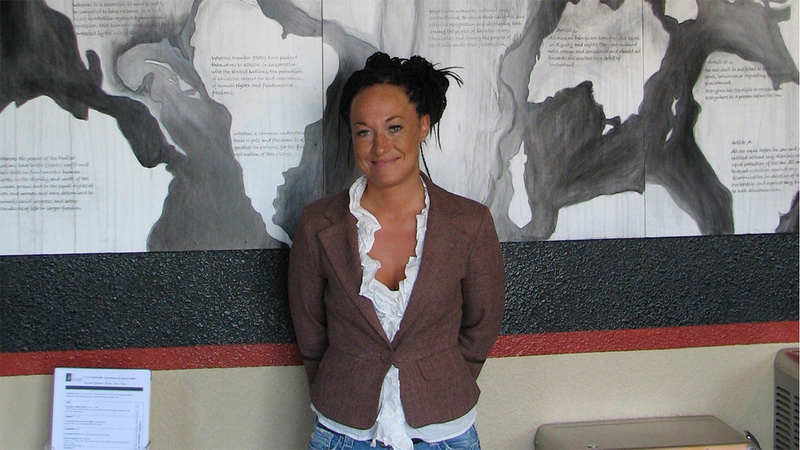 Head of Spokane NAACP quits amid furor over racial identity

SPOKANE, Wash. -- Rachel Dolezal, the woman at the center of a controversy over whether she lied about her race on a government job application, resigned her position as the president of the Spokane NAACP Monday in an announcement on the chapter's Facebook page.

"In the eye of this current storm, I can see that a separation of family and organizational outcomes is in the best interest of the NAACP," Dolezal wrote. "It is with complete allegiance to the cause of racial and social justice and the NAACP that I step aside from the Presidency and pass the baton to my Vice President, Naima Quarles-Burnley."

Dolezal's story gained international attention after her biological parents told the media that they, along with their daughter, were white, and that she had been misrepresenting her race for years.

"She was obviously misrepresenting herself," Ruthanne Dolezal told Good Morning America Monday. "We were aware of that but we did not pursue exposing her. It was only after the press came to us that we were willing to answer their questions."

Dolezal was approached by ABC affiliate KXLY about the allegations but walked away mid-interview.

The city of Spokane launched an investigation Thursday to determine whether Dolezal lied on her application for the citizen police ombudsman commission, KXLY reported.

Dolezal did not address the validity of the allegations in her resignation.

"Please know I will never stop fighting for human rights and will do everything in my power to help and assist, whether it means stepping up or stepping down, because this is not about me," she wrote. "It's about justice."
Related topics:
u.s. & worldnaacp
Copyright © 2022 KTRK-TV. All Rights Reserved.
RELATED
Rachel Dolezal's parents open up after alleging she's white
TOP STORIES
Texas Supreme Court blocks order that resumed abortions
Scattered downpours possible Saturday
Santa Fe families invited to White House signing of Gun reform bill
Fort Bend Co. residents worried about power plant amid SCOTUS ruling
Man gets probation for role in the 2019 death of a 5-year-old girl
Sunnyside community hope new billboard helps lower crime
City of Houston prepares for Shell Freedom Over Texas
Show More
Spring man sentenced to 45 years for neighbor's murder back in 2017
Hello, Hector Herrera! Dynamo introduce new star
Woman shot at drive-thru speaks out as police look for suspect
Father killed and son shot by suspect in Lake Jackson, police say
16-year-old shot in the face during attempted robbery in W. Harris Co.
More TOP STORIES News