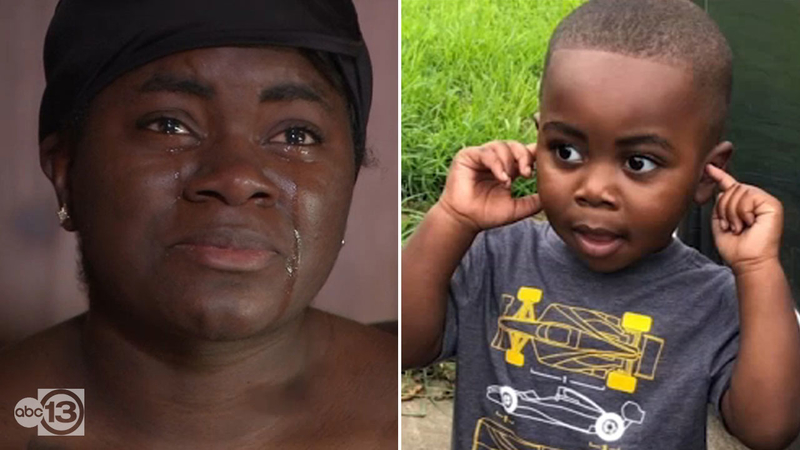 SPRING, Texas (KTRK) -- A heartbroken mother is breaking her silence after her 2-year-old son was killed when shots were fired into the family's garage in Spring.

According to authorities, the 38-year-old father and his friend were standing by the garage bay door, close to the parking lot. Investigators believe the shooter shot them first, then went into the garage and shot Ivory West Jr.

"I just want my baby back, I just want him back," Harris said through her tears during an exclusive interview with ABC13 Eyewitness News.

RELATED: 'Why kill a 2-year-old?' Harris County Sheriff urging public to look out for 'dangerous' individuals

Harris said she was washing out bottles on Tuesday when she heard fireworks followed by gunfire and Ivory's scream.

Through the tears, Dorothy Harris spoke of her son's final moments.

Deputies say the father was shot nearly 10 times. He was flown to Memorial Hermann, where he's in critical condition but expected to survive. The friend was shot once in the foot and is stable in the hospital. Ivory was pronounced dead at the scene.

Harris described the 2-year-old as energetic and was always running through the house. She recalled his last words being "I love you."

Deputies are looking for help in identifying the suspects. They are described as two black men between the ages of 25 and 35 years old. The men are approximately 5'10'' to 6' tall. One of the suspects was wearing a black hat, black pants and a black hoodie with "NIKE" on the front in gold letters. The other suspect wore a red hat and a gray T-shirt.

"My baby didn't have a chance to go to school, didn't get a chance to see his third birthday," Harris said.

The family has started a GoFundMe for funeral expenses.