INDIANA -- A mother is preserving her son's memory by hiding his favorite toys, Hot Wheels cars, around the neighborhood for strangers to find.

"Since he passed, it's hard dealing with your grief," Tracey Blackmore of Carmel, Indiana told ABC News. "You can be sad and feel sorry for yourself or you could do something about it. I just wanted to spread his love and his story and also help raise money for childhood cancer research."

On June 13, 2015, 6-year-old Brooks Blackmore was diagnosed with two astrocytomas, which are cancerous tumors of the brain. The stage 4 tumors were inoperable, and despite several rounds of radiation treatments, in March 2016 another tumor developed.

"I just miss his laugh and the joy he would bring to our lives," Blackmore said of her son. "He was such a silly boy always making little fart jokes or butt jokes. He has younger siblings. They are now 3 years old. They're boy-girl twins and I miss the love that he would share with them."

Each bag contains Brooks' story, statistics on childhood cancer, a copy of Brooks' painting, a link to his St. Baldrick's Foundation fundraising page and a packaged Hot Wheels car donated by the Mattel toy company. 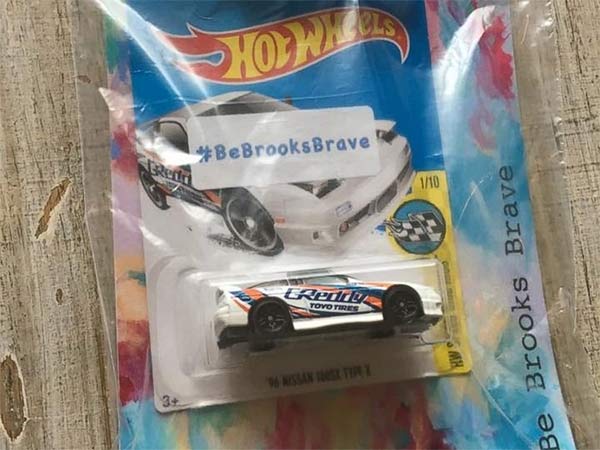 December 20 would have been Brooks' 7th birthday. In an effort to remember him on that day and during the holidays, his mom began scattering 200-plus Hot Wheels cars in some of Brooks' favorite places in the neighborhood.

"We have a very emotional month here, so I wanted to bring it joy and happiness instead of sadness," Blackmore said. "I wanted to inspire others to keep fighting, be brave and hopefully do something good for somebody else too."

Blackmore has mailed some Hot Wheels across the country so out-of-state family can hide them as well.