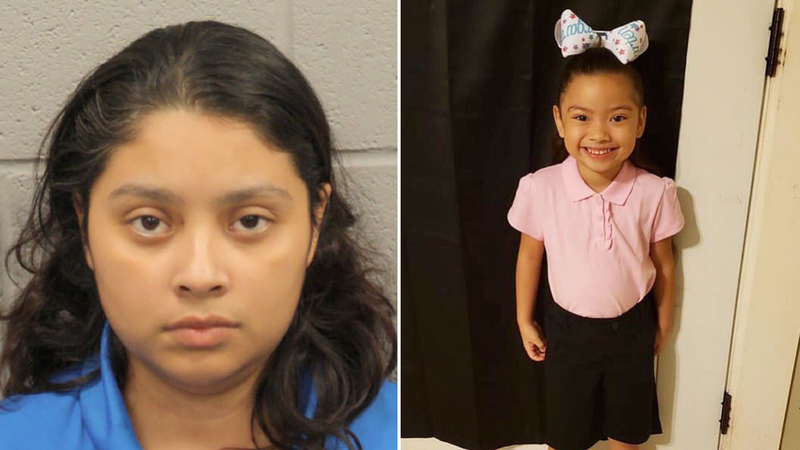 HOUSTON, Texas (KTRK) -- A mother has been arrested after police say she confessed to hiding her 5-year-old's body inside an apartment closet after the girl allegedly died from ingesting chemicals.

On Tuesday, 27-year-old Priscilla Nicole Torres was arrested in connection to the child's death, according to Houston police. Torres faces a felony charge of tampering with evidence, a human corpse.

ABC13 also learned Torres' live-in boyfriend was interviewed by police, but he is not in custody and has not been charged.

Police said the body of 5-year-old Sierra Patino was hidden in the closet for nearly a week.

Police say family members came to the apartment earlier Monday to check on the 5-year-old girl, who hadn't been seen for some time.

Houston police give update on child's body found in closet.

When the visitors asked about a foul smell inside the apartment, the mother confessed the source of the odor was Sierra's body, according to police.

Officers said she claimed the child had died from ingesting chemicals on Aug. 27. Sierra's body had been kept in the closet ever since.

"It's very troubling," said HPD Lt. Larry Crowson. "No matter how the child died, you know, whether it's an accidental or intentional death, for a body to be in a closet for several days, that's just unthinkable."

Investigators are now trying to see whether Sierra's death is consistent with the mother's statement to police.

An autopsy will determine whether her death was accidental or intentional, and is expected to shed light on what chemical she may have ingested.

On Tuesday, the girl's family said Sierra is originally from Jacinto City and attended Jacinto City Elementary School. She and her mother moved in with the mom's boyfriend on Aug. 23.

Also on Tuesday, Galena Park ISD released a statement on the girl's death:

"Galena Park ISD was made aware today and is deeply saddened that the young child who tragically lost her life last week was enrolled at Jacinto City Elementary. Counseling and support have been provided for students and staff, and will continue as long as needed. We extend our heartfelt sympathy and ask our community to pray during this very difficult time."