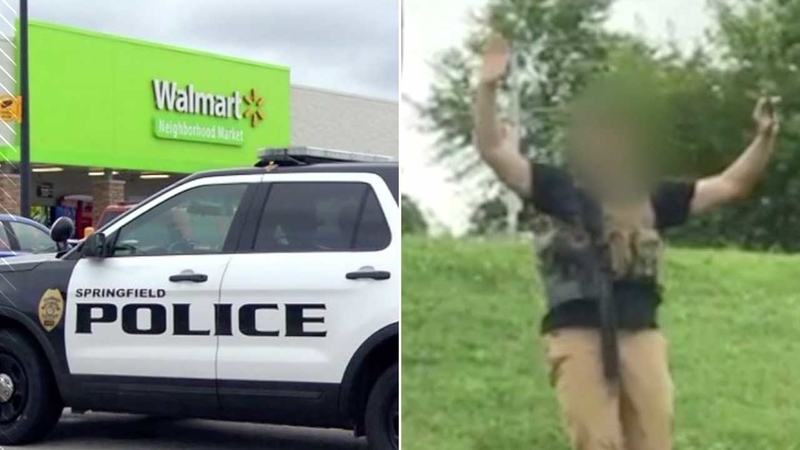 SPRINGFIELD, Mo. -- Cell phone video captured the arrest of a man who caused a scare outside a Walmart in Springfield, Missouri.

The Springfield Police Department said they responded to a call of an active shooter at the Walmart: Neighborhood Market at Republic Rd., near Golden Ave., Thursday evening, reported KSPR.

The man walked into the store where he grabbed a cart and began pushing it around, according to police. They said the man was recording himself walking through the store via a cell phone.

The store manager at the Neighborhood Market pulled a fire alarm, urging people to escape the store.

Police said the man then made his way out an emergency exit. An off-duty firefighter spotted the man and held him at gunpoint until authorities responded.

At that moment Springfield police arrived on scene and detained the man.

The man appeared to be in his 20s armed with a rifle, wearing a bulletproof vest and carrying more than a hundred rounds of ammunition, police said.

Cell phone video shows police arrest a man who was armed with a rifle and body armor at a Walmart in Springfield, Missouri.

While no shots were fired, the man terrified shoppers who fled from the store.

Police said they observed many shoppers hiding outside the Walmart and at nearby businesses.

Lieutenant Mike Lucas said it was clear the man's intent was to cause chaos, saying in part, "His intent was not to cause peace or comfort...He's lucky he's alive still, to be honest."

Police identified the man's vehicle and are investigating the possibility of more firearms inside the vehicle.

RELATED: Man asked for something 'that would kill 200 people' at Walmart: Police

The incident comes less than a week after a deadly mass shooting inside a Walmart store in El Paso, Texas.