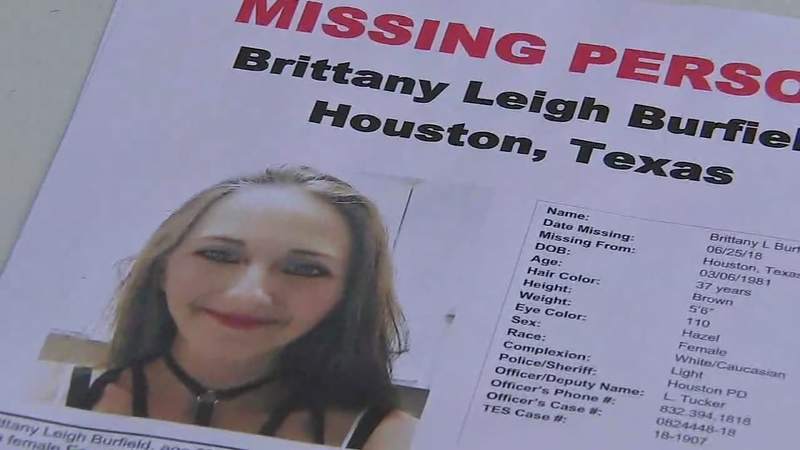 HOUSTON, Texas (KTRK) -- About a dozen volunteers with Texas EquuSearch were out Tuesday in a wooded area looking for a 37-year-old Houston woman who went missing over a week ago.

Brittany Burfield was last seen on Monday, June 25 by her mother, Tricia Valentine.

Brittany, where are you? Your family is desperate for answers. Read more about the woman's disappearance here -> https://t.co/08lWaY0Q56. At 4PM on #abc13, who was last seen with her car? I'll show you the video. #hounews pic.twitter.com/WCur9kzVvc

In an interview with ABC13, Valentine said she hadn't heard from her daughter in days, so she texted her. She then received strange text messages from Brittany's cell phone last week.

"I felt queasy. There was just something odd. I kept asking her to call me, and the text message said the phone was broken and she was with a new guy she had met," she explained.

Valentine filed a police report. She said officers went to her daughter's apartment, where they found things were out of order.

"The apartment was unlocked and she had things missing out of it. The cats have obviously not been fed all week, which she would never do because they were like her children," Valentine said.

The focus of Tuesday morning's search was at Deerwood Road near Harbor Oaks in west Houston.

Brittany's sister Brandy Burfield says they are still holding on to hope that she will be found alive. They have their cell phones charged just in case Brittany calls.

"I'm feeling really grateful that all of these people came out to help me find my sister. I'm overwhelmed and scared and terrified and I really want my sister found," Brandy said.

Brittany has a two-inch tattoo of a female Egyptian eye on the back of her neck.

She was last seen wearing black shorts and a black V-neck shirt.

If you have any information about Brittany's disappearance, you're urged to call police.